Update Required To play the media you will need to either update your browser to a recent version or update your Flash plugin.
By VOA
02 July, 2015


Tunisia has detained 12 people in connection with an attack last week that killed 38 people, an official said Thursday.

Security forces killed the gunman following the mass shooting Friday in the city of Sousse. Officials said he was the only shooter. But they have been searching for people who may have given him help before the attack.

The Islamic State group claimed responsibility, just as it did when two gunmen killed 21 people at the Bardo museum in Tunis in March. Most of the dead in both attacks were foreign tourists.

An appeals court in Afghanistan has cancelled death sentences given to four men found guilty of murder earlier this year. 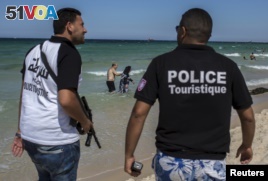 One defense attorney told VOA that three of the men were re-sentenced to 20-year terms. The fourth convict was sentenced to 10 years because he was 17 when the crime took place.

Farkhunda Malikzada was 27 years old when a mob attacked and killed her last March in Kabul. A mullah had accused her of burning the Koran just before the attack. An investigation showed no evidence of that accusation.

Philippine officials said at least 36 people are dead and more are missing after a passenger boat capsized in the central part of the country.

The Kim Nirvana was carrying 189 people Thursday when officials said it went down only a kilometer from Ormoc City on the island of Leyte.

The coast guard said at least 127 people have been rescued. Divers are searching for at least 26 other people.

The U.S. women's soccer team will get a rematch with Japan, the team that beat them in the 2011 Women's World Cup final. The two will play Sunday in Vancouver, Canada.

Japan moved forward in competition Wednesday after defeating England in play in Alberta, Canada. The score was 2-1. England player Laura Bassett made the winning goal for Japan when she accidentally sent the ball into her team's net.

detain – v. to keep (someone) in official custody, typically for questioning about a crime or in politically sensitive situations.

mob – n. a large group or crowd of people who are angry or violent or difficult to control

capsize – v. to turn so that the bottom is on top