Update Required To play the media you will need to either update your browser to a recent version or update your Flash plugin.
By VOA
13 July, 2015

The European Union has agreed to provide tens of billions of dollars in new loans to Greece. This financial rescue plan is the third agreement between Greece and other European countries. It came after 17 hours of negotiations over the weekend.

Greece will receive almost $100 billion in loans in exchange for making economic reforms. These reforms include changes to how the country collects taxes and cutting financial assistance for retired persons.

Greek government leaders must now persuade the country's parliament to approve the agreement by Wednesday. 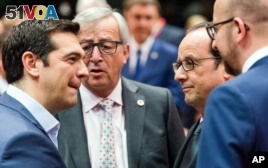 High-level officials are still meeting on the last day planned for negotiations on Iran's nuclear program. The talks are taking place in the Austrian capital, Vienna.

Some observers believe a nuclear deal will be announced soon. But top diplomats involved in the talks have told reporters in the past 24 hours that important issues remain unresolved.

Iran is meeting with representatives of Britain, China, France, Germany, Russia and the United States. The foreign minister of the European Union has also been involved. Three other times, the negotiators failed to meet a time limit for reaching a nuclear agreement.

Talks about limiting Iran's nuclear activities have been taking place for more than 10 years.

A number of countries have limited trade with Iran to protest what they believe are its efforts to develop nuclear weapons. Iran has always denied that it is doing so. If a deal is reached, the economic restrictions could be cancelled.

Iraqi officials have announced the start of an offensive to recapture the western province of Anbar from Islamic State fighters. The militants control large parts of Anbar, including the cities of Ramadi and Fallujah.

The Iraqi government has been making plans to retake the province since the militants seized Ramadi in May. The success of the self-declared Islamic State led some observers to criticize the ability of the Iraqi military.

China says its imports and exports were 6.9 percent lower in the first half of 2015, compared to the first six months of last year. The Chinese government's goal was a six percent increase.

The government blames the drop in trade on slower demand among Chinese consumers and in foreign markets.

Pope Francis returned to Rome from Paraguay on Sunday. He had been in South America for a week.

Pope Francis is the first Roman Catholic Church leader from South America. On Sunday, he visited a very poor community along the Paraguay River. Thousands of people gathered to see him.

During his visit to Ecuador, Bolivia and Paraguay, the pope criticized capitalism. He said the world needs a new economic system in which both rich and poor people share the Earth's resources equally.

This newscast was based on stories from VOA's News Division. Christopher Jones-Cruise adapted it for Learning English. George Grow was the editor.

loan(s) – n. money borrowed that usually must be returned with interest payments; something borrowed

consumer(s) – n. an individual or organization that uses a good or service

altar – n. a structure on which offerings, including sacrifices, are made for religious purposes