Oil Spill in US Puts Attention on Pipelines, Waterways

Update Required To play the media you will need to either update your browser to a recent version or update your Flash plugin.
By VOA
2011-7-7 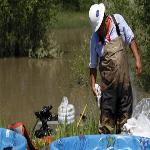 Photo: AP
A worker in the operation to clean up an estimated 1,000 barrels of oil that spilled from an Exxon Mobil pipeline along the Yellowstone River in Montana

Last Friday night, an oil pipeline broke under the Yellowstone River in the western state of Montana. The Yellowstone is America's longest undammed river. The spill happened downstream from Yellowstone National Park.

The burst pipe spilled as much as one thousand barrels of crude oil -- more than one hundred sixty thousand liters -- into the river.

Workers shut off the Exxon Mobil pipeline, and the company continues to clean up the spill. But spokeswoman Claire Hassett said examining the damage has been difficult.

CLAIRE HASSETT: "What we have learned so far has been hindered by the rapid flow of the river right now. It's at historic water levels."

The river is at flood levels, overflowing riverbanks and carrying oil downstream into wetlands, fields and yards.

In May, Ms. Hassett says, local officials ordered a temporary shutdown to check on the pipeline. They were concerned with heavy rains and rising waters.

CLAIRE HASSETT: "And we determined that it was safe to operate and again we don't know what has caused this leak so it would be premature to say the two are related."

Susan Casey-Lefkowitz from the Natural Resources Defense Council, an environmental group, says the spill shows the dangers of mixing pipelines and waterways.

SUSAN CASEY-LEFKOWITZ: "Especially when they are running under some of our most precious river systems that are important not just for wildlife, but also for our communities. The Yellowstone River is critical for irrigation for example. And so it serves the needs of a lot of farmers and communities along its path."

Andy Black heads the Association of Oil Pipe Lines, an industry group whose members include pipeline owners and operators.

ANDY BLACK: "We have processes both within companies and at the associations to share learning and best practices and pursue the goal which is zero accidents."

ANDY BLACK: "I don't see a need to overhaul the regulations. The regulations cover the major causes of pipeline failures, and we do not see any gaps."

SUSAN CASEY-LEFKOWITZ: "Whereas the oil industry may find it business as usual to have a certain number of spills, it is really not acceptable, especially in this day and age. It shouldn't be best practices to have spills in the Kalamazoo River in Michigan, in the Yellowstone River in Montana and potentially in the future in the Ogallala aquifer which would be crossed by this new proposed Keystone XL pipeline."

The Ogallala aquifer is a major source of drinking and irrigation water for America's central plains. The proposed Keystone XL pipeline would carry heavier crude oil produced from tar sands in Canada. Ms. Casey-Lefkowitz says it would carry the oil more than three thousand kilometers, crossing the central United States -- and the Ogallala -- for processing in Texas.

SUSAN CASEY-LEFKOWITZ: "Ironically it would actually cross the Yellowstone River where the spill just happened."