Update Required To play the media you will need to either update your browser to a recent version or update your Flash plugin.
By Hai Do
29 November 2021


Many countries are closing their borders as health experts continue to study the latest version of the coronavirus, the Omicron variant.

On Monday, Japan became the latest country to ban all foreigners from entering the country. Over the weekend, Israel and Morocco announced that the countries are closed to all international travelers. Israeli citizens can come back to the country. But they will have to quarantine, even if fully vaccinated.

Australia said it would delay reopening the country to international students and workers for two weeks. The move came after the country reported its first cases of the Omicron variant of the new coronavirus.

Across the world, the United States, Brazil, Britain and the European Union announced travel restrictions from eight African countries where the variant was first identified. The countries are South Africa, Botswana, Zimbabwe, Namibia, Lesotho, Eswatini, Mozambique, and Malawi.

New cases of Omicron infection have since been identified in Hong Kong(China), Australia, Canada, and several European countries. 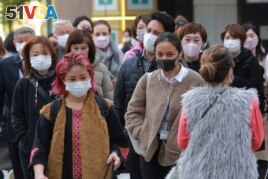 People wearing face masks to protect against the spread of the coronavirus walk along a street in Tokyo, Monday, Nov. 29, 2021. (AP Photo/Koji Sasahara)

Speaking from the White House on Monday, American President Joe Biden said, "Sooner or later we're going to see cases of this new variant here in the United States. We'll have to face this new threat just as we face those that come before it."

The president added, "The best protection against this new variant or any of the variants out there, the ones we've been dealing with already, is getting fully vaccinated and getting a booster shot."

The variant was first identified on November 9 and reported to the World Health Organization (WHO) on November 24. Two days later, the WHO designated the coronavirus variant B.1.1.529 a variant of concern, or VOC, and gave it the name Omicron.

The health organization said Omicron "has a large number of mutations, some of which are concerning." A mutation is a change in the genetic material of a virus. The WHO added that early evidence suggests "an increased risk of reinfection with this variant, as compared to other VOCs."

Scientists still do not know whether the mutated versions could make it more dangerous. But the WHO said, "There is currently no information to suggest that symptoms associated with Omicron are different from those from other variants."

Dr. Angelique Coetzee, a South African doctor who was one of the first to identify Omicron, spoke to Reuters. She said that symptoms of the variant were not severe and could be treated at home.

It is also unknown whether currently approved vaccines or treatments will protect against the variant.

Dr. Francis Collins is head of the U.S. National Institutes of Health. He told Fox News Sunday, "We do know that this is a variant that has a lot of mutations – like 50 of them, and more than 30 of those in the spike protein, which is the part of the virus that attaches to your human cells if you get infected."

Collins added, "It does make you worry, therefore, that it's a sufficiently different virus, that it might not respond as well to protection from the vaccines. But we don't know that."

On Friday, American drug-maker Pfizer and its German partner BioNTech said new information would show whether their vaccine will have to be changed. The companies said, if necessary, they expect to be able to ship a new vaccine against Omicron in about 100 days. The Pfizer vaccine uses mRNA technology which uses RNA genetic material to change cells.

Moderna is the maker of the other highly effective mRNA vaccine. It said it is working on a booster designed to protect against several variants. And Johnson & Johnson stated that it was already testing their vaccine against Omicron.

Vaccines, however, are still not widely available in poor and developing countries. In Africa, where Omicron was first reported, only seven percent of the continent's 1.2 billion people have received the shots so far.

Hai Do wrote this story for Learning English. Mario Ritter Jr. was the editor.

booster shot –n. an extra amount of a vaccine that is injected with a needle into a person or animal to help protect against a disease

sufficiently –adv. provided as much as is needed