Update Required To play the media you will need to either update your browser to a recent version or update your Flash plugin.
By VOA
30 April, 2015


Vietnam has held a parade to celebrate the 40th anniversary of the end of the Vietnam War. The victory of North Vietnamese forces brought the whole country under communist rule.

Thousands of flag-waving soldiers, former armed forces members and others took part in the parade Thursday. They marched toward the center of Ho Chi Minh City. Top government and communist party officials watched the event.

The parade was supposed to be a reenactment of the events of April 30, 1975. Forty years ago, North Vietnamese tanks entered the center of what was then the South Vietnamese capital, known as Saigon. 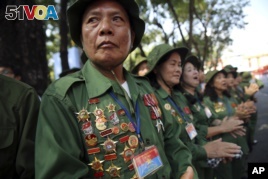 Vietnamese veterans gather for a parade celebrating the 40th anniversary of the end of the Vietnam War which is also remembered as the fall of Saigon, in Ho Chi Minh City, Vietnam, Thursday, April 30, 2015.

The event marked the end of the Vietnamese communists' war against colonial ruler, France, and then against U.S.-supported South Vietnam. About 58,000 American soldiers died in the conflict. Up to four million Vietnamese were killed.

The United States supported South Vietnam against the North. U.S. officials saw the war as part of larger campaign to stop the spread of communism. Forty years ago, the U.S. government pulled its last embassy officials out of Saigon as North Vietnamese forces entered the city.

He said, "I call on the Vietnamese people at home and overseas to support the sense of patriotism, the tradition of humanity and tolerance ... to rise above past differences – to sincerely engage in national reconciliation."

Prime Minister Dung also criticized the United States for what he called its "countless barbarous crimes." He said the U.S. had caused "immeasurable losses and pain to our people and country." The French news agency reported his comments.

No U.S. diplomats attended the parade. In recent years, economic and military ties between the two countries have improved. Thursday was the 20th anniversary since the countries reestablished diplomatic relations.

Vietnam now accepts some forms of capitalism. But it continues to have a one-party system of government and restricts free speech.

This report was based on a story from VOANews.com. George Grow adapted it for Learning English. Mario Ritter was the editor.

communist – adj. supporting an economic and social system in which the government owns the things that are used to make and transport products and there is no privately ownership of land

communism – n. an economic and social system in which the government owns the things that are used to make and transport products and there is no privately ownership of land

reenactment – n. an event or performance in which people attempt to recreate parts of a historical event

capitalism – n. a system in which people and businesses own most land, factories and other forms of property – not the government