Update Required To play the media you will need to either update your browser to a recent version or update your Flash plugin.
By Anna Matteo
07 October, 2014 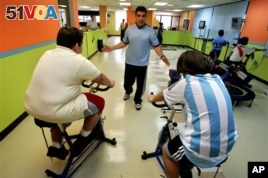 Whatever you want to call it, many studies show that children around the world are becoming less active and less physically fit. The result is an increase in obesity, the condition of being severe overweight, also diabetes and other diseases.

It is a major concern for public health officials. And it may be that fitness levels affect more than physical health. For students, it may also affect test scores.

VOA's Carol Pearson was in Redondo Beach, California, recently with more than 700 children. They were walking to school with parents and, in some cases, even their dogs. The students do this once a week. The children may not know it but they walk to help reduce childhood obesity. It is also meant to increase their activity, or fitness, level.

"It's a good way to get the kids exercising in the morning."

For the kids, it's just fun.

"One of my friend's name is Elissa. And we talk about a lot of things at school. We talk about how hard our homework is and all of the fun activities we're doing."

A study from the U.S. Centers for Disease Control and Prevention shows that most American children are physically unfit. But, children in other countries also face this problem.

Health officials across the world are concerned about rising rates of obesity and type 2 diabetes in children as young as eight. This kind of diabetes is directly related to poor diet and lack of physical activity.

The World Health Organization advises that children between the ages of five and 17 get at least 60 minutes of physical activity every day. The activity should be moderate to very energetic, or vigorous.

Studies on children and exercise show that fitness is good for more than just physical health.

A U.S. Institute of Medicine study shows that physical activity helps students with their studies. Harold Kohl led the study. He is a professor of epidemiology at the University of Texas. He researches how diseases spread among populations.

"The evidence is really emerging in the last five or six years. Both cognitive studies, as well as brain imaging studies and others, show the acute effects of a bout or two physical activity on blood perfusion in the brain. [It is] in the center that really help children learn, recall things faster, think faster and actually are more likely to achieve their full academic potential compared to children who are not physically active."

And that's the Health Report.

obesity - n. a condition where you have too much fat stored in the body

active - adj. (of a person) engaging or ready to engage in physically energetic pursuits.

activity - n. something that is done for pleasure and that usually involves a group of people

fitness - n. the quality or state of being fit or healthy