Is Writing Notes by Hand Better Than Typing?

Update Required To play the media you will need to either update your browser to a recent version or update your Flash plugin.
By VOA
30 September, 2014

Many college students have given up taking class notes by hand. Instead, they type on laptop or tablet computers. But scientists from Princeton University and the University of California say that that method is less effective.

If you need to remember something, write it. Writing notes by hand is much better for long-term memory of ideas, or conceptual information. That is the finding of a 2014 study published in the journal Psychological Science.

Unplug for a deeper understanding.

So, turn off your computer if you want to remember something. Computers can take your attention away from your work. They can be distracting. Computers provide the chance to send a quick message to a friend, check a sports' score, shop or watch a funny cat video. 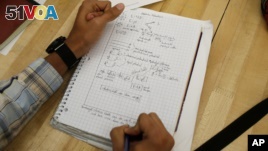 It is really hard to resist a funny cat video.

Here is what the research showed.

Students who type notes on a keyboard often transcribe, or write down what the professor says word-for-word. They may write without really thinking about what they are writing. These electronic notes contained more words. But scientists say it leads to "mindless transcription." Transcription means to record something exactly as you hear it.

However, students taking notes long-hand, or by writing them, need to first process the information they hear. Then they record just the main points, or summarize. They use fewer words. This is because people usually write slower than they type. This process of summarizing information leads to a deeper understanding, say the researchers.

In the study, students listened to a teacher and then took a test. Some took notes by typing on a computer. The others took notes by writing them down.

Both groups performed about the same in remembering facts. But students who typed their notes did much worse on conceptual questions. These questions required them to understand an idea.

Those who typed also could not stop transcribing even after they were told to try to avoid it. So even if you want to stop typing what you hear word-for-word, you might not be able to.

Also, researchers found that those who wrote their notes remembered conceptual information better a week later. Researchers believe that the students who wrote notes long-hand had a deeper understanding of ideas and concepts. 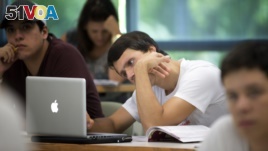 Taking notes by typing on the computer may not be the best way to study.

Hands off my computer.

Scientists know that students probably will still use their laptops and tablets in class. But they suggest using some of the available technologies for writing notes by hand on computer screens. They say this might be a good compromise between old school and new school.

This research was contained in a classroom. But the findings may be valuable for anyone wanting to remember more of what they read, hear or see.

Anna Matteo wrote this story based on a VOA report and articles by Maria Konnikova in the New York Times and Kasia Galazka for Buzz Feed.

conceptual – (adj.) based on or relating to ideas or concepts

academic - (adj.) of or relating to schools and education

summary – (n.) a brief statement that gives the most important information about something; summarize – (v.) to tell (information) again using fewer words