Update Required To play the media you will need to either update your browser to a recent version or update your Flash plugin.
By Bryan Lynn
28 October, 2016


Police have removed more than 100 protesters from private land in the midwestern state of North Dakota. The protesters were showing their opposition to an oil pipeline in a demonstration that turned violent.

An official with the Morton County Sheriff's Department told the Associated Press 141 people were arrested Thursday.

Police officers used pepper spray to break up a camp of protesters. Among those arrested was one person who had fired three shots at police. No serious injuries were reported. One man was treated for a leg injury, according to the AP. 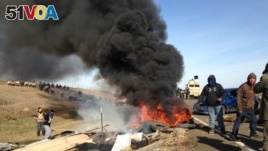 Dakota Access oil pipeline protesters burn debris as officers close in to force them from a camp on private land in the path of pipeline construction, Oct. 27, 2016 near Cannon Ball, N.D.

Sheriff Kyle Kirchmeier said protesters were given a final warning Wednesday to leave the private land, but they did not go.

Protests by Native Americans and their supporters have been held in the area since July. The demonstrators oppose the building of the Dakota Access pipeline.

Much of the 1,700-kilometer pipeline is nearly complete. When finished, it would transport about 400,000 barrels of oil a day from North Dakota to Illinois. From Illinois, other pipelines could then transport the supply to shipping ports and refineries across the United States.

The pipeline's path comes within one kilometer of land belonging to American Indians from the Standing Rock Sioux tribe.

The tribe has said the pipeline, which would be buried under the nearby Missouri River, could endanger its water supply. It also believes construction could destroy sacred Native American historical sites.

Hundreds of protesters had gathered on nearby U.S. government-owned land to hold demonstrations. Others have been arrested since those protests began in July.

But this week, the protesters occupied land owned by Energy Transfer Partners, which leads construction of the pipeline. The company has rejected the protesters' arguments and says the project meets all legal requirements.

Supporters of the project say the pipeline is a safer and more cost-effective method than using roads or railways to move the oil.

The tribe brought a legal case in court to dispute the approval of permits by the U.S. Army Corps of Engineers for construction on federal land. A federal judge denied a request in September to halt the project. 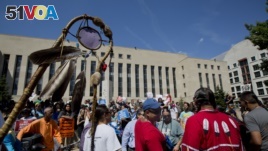 Native Americans gather during a rally outside U.S. District Court in Washington D.C. on Aug. 24, 2016, in solidarity with the Standing Rock Sioux tribe in the lawsuit against the Army Corps of Engineers.

But three federal agencies took action to stop construction on land owned by the Army Corps of Engineers. The Corps is currently deciding whether to reconsider the environmental impact of the pipeline. This would stop construction for a longer period.

A spokesman for the protesters said the latest police action will not silence the movement. He said they plan to build a new camp at another location in the pipeline's path - but this time on federal land.

We want to hear from you. Do you think the government should keep blocking construction of this pipeline? Write to us in the Comments section, and visit 51VOA.COM.

pepper spray – n. substance made from peppers that causes irritation to the eyes, nose and skin when sprayed

barrel – n. a standard measure for oil that is equal to about 159 liters

refinery – n. factory where substances such as oil are made pure

impact – n. effect of a situation or thing on something else