Update Required To play the media you will need to either update your browser to a recent version or update your Flash plugin.
By Anna Matteo
14 September, 2014


Twenty-five percent of American women will experience domestic violence, that is, physical abuse by a partner. Most cases are never reported to police. But recently such violence was captured on video tape.

The National Football League, or NFL, player Ray Rice was recorded hitting his girlfriend Janay Palmer, who is now his wife. The NFL dismissed Rice after the full video was released to the public last week. The release has also led to public discussion about domestic violence.

Last February the media released a video that showed Ray Rice, an NFL football player, pulling his apparently unconscious girlfriend out of an elevator. The National Football League suspended him for two games for domestic violence. But many criticized the punishment as being too light.

In late July, he spoke to the media. 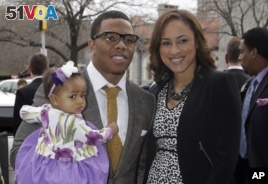 In this March 11, 2013 file photo, Baltimore Ravens running back Ray Rice, left, poses with his daughter, Rayven, and Janay Palmer.

"I made the biggest mistake in my life. She can do no wrong. She's an angel."

The full video of what really happened.

But this week the media operation TMZ released another video. This video shows what happened inside that elevator.

The couple seems to argue. Rice hits Palmer. She moves toward him and he hits her again, in the face. Her head crashes into the side of the elevator as she falls to the floor. She does not move. She appears to be unconscious. The elevator doors open and Rice pulls her across the floor, partly out of the elevator.

The Baltimore Ravens cancelled Rice's $35 million employment agreement after the video was broadcast. Shortly after that, NFL Commissioner Roger Goodell suspended the player from football.

Women on Twitter using the hashtag #WhyIStayed and #WhyILeft, shared their stories of domestic violence. The tweets explain why they stayed in an abusive relationship or why they left. Or in some cases both.

One woman tweets, "#WhyIStayed I had no where else to go. We had merged everything. #WhyIleft it was better to be homeless then terrorized in my own home."

In many cases of domestic violence, there are children involved. The abused person does not seek help because they fear the abuser may hurt the children. Sometimes those abused worry about possible legal action to remove their children from their care.

One woman tweets about the difficult situation many face – staying with an abuser to keep a family together.

Janay Rice has also used social media in connection with the video. On Instagram she wrote, "To make us relive a moment in our lives that we regret every day is a horrible thing."

She also criticizes her husband's dismissal from the Ravens and the NFL suspension.

Janay Rice is not the only one who feels that her husband's suspension went too far.

Melissa Jacobs is managing editor of the website TheFootballGirl.com. She says Mr. Rice's actions deserve a severe punishment. However, she says she does not feel this punishment fits the crime.

"Yeah, as I was saying, Ray Rice is deserving of a very severe penalty given how cold-blooded and dangerous his actions were. Because of the video and Rice's fame, I think he's the perfect defender to be made an example of for an issue that is far too prevalent in the NFL. That said ... I'm not sure an indefinite suspension would have been an appropriate response at first judgment."

Ms. Jacobs also says that the NFL has been merely reacting to events. She says the NFL's history on domestic violence issues is questionable. When asked if the NFL has changed, Ms. Jacobs says that remains to be seen.

"Well, that's still to be determined. Every single action by the NFL from the new domestic violence policy to Rice's indefinite suspension has been reactive. The League still seems to be incompetent when it comes to understanding domestic violence. So, it's very hard to say what has changed when really nothing has."

The spokeswoman for the National Network to End Domestic Violence is Rene Renick. She welcomes feedback, comments and opinions, about this issue. She spoke to VOA by Skype.  She said she hopes this incident will cause more people to talk about and think about the issue.

"One in every four American women will experience domestic violence sometime at her life. I hope the NFL will make good on their commitment to take this seriously."

On social media, Janay Rice calls Ray Rice the man she loves. Then she describes the pain that the media and public reaction around the country have caused her family.

"We don't know what's happening for her. But often victims are made to feel like it's their fault."

Ms. Renick says there are some positive effects from this horrible incident. She says it sends a clear, strong message that domestic violence is unacceptable.

October is Domestic Violence Awareness Month and the color to represent it is purple. The non-profit National Network to End Domestic Violence has asked NFL football teams to wear the color purple for the month of October. The group hopes the action will help increase recognition of the problem.

domestic violence – (n.) the inflicting of physical injury by one family or household member on another

unconscious - (adj.) not awake especially because of an injury or drug

feedback – (n.) helpful information or criticism that is given to someone to say what can be done to improve a performance, product, etc