Republicans Are Confident with Midterm Elections

Update Required To play the media you will need to either update your browser to a recent version or update your Flash plugin.
By Christopher Cruise
07 October, 2014


On November 4, voters across the United States will choose who represents them in Congress. Voters will select all 435 positions in the House of Representatives. And, this year they will select 33 of 100 Senators.

The Republican party currently holds the majority in the House of Representatives. The Democrats hold the Senate and the presidency.

Republican party leaders say after next month's elections they will control both the House and the Senate. If they are right, President Barack Obama will face a difficult final two years in office.

Karlyn Bowman is a senior fellow at the American Enterprise Institute and an expert on public opinion.

Some experts believe Republicans have a good chance of taking control of the Senate simply because more Republicans than Democrats vote in midterm elections.

John Fortier is a political scientist at the Bipartisan Policy Center in Washington.

"Midterm elections tend to be a little bit more of a Republican election. More Republican voters show up. It is a smaller electorate than a presidential election. And for all those reasons I think the direction will be in the Republican direction. I think the big question is, is it enough in that direction to get control of the Senate."

Neil Newhouse is a Republican advisor. He says no one will know who will control the Senate until Election Day.

"Guys, we have a long ways to go. I mean, a lot of stuff can happen in this race. The Senate is not yet decided."

Stan Greenberg is a public opinion expert for Democrats. He says the president's popularity may have recently increased because of his decision to attack Islamic State militants in Iraq and Syria. 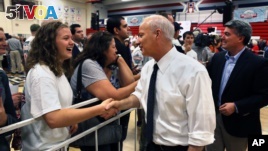 "We'll look at what happened with ISIS and Syria and Iraq, and it might represent a point in which the president edged up nationally."

But many voters do not agree with the president's policies on the economy and foreign policy. Experts say their disapproval could affect how they vote in November.

"What are midterm elections about, particularly second term midterm elections? It is a referendum on the incumbent president. You know, I am going to use a technical political science term here. This is a bummer (bad) environment for Democrats."

Michael Dimock is a public opinion expert with the Pew Research Center in Washington. He says the president has had a difficult second term.

"His handling of foreign affairs got better ratings than his overall job ratings for almost his entire first term. And now in his second term that is inverted. Foreign policy is sort of a drag on his overall standing, not a lift."

The election is very important for President Obama, even though he is not on the ballot. If Republicans control both houses of Congress, they likely will not approve legislation he supports. They may also not approve officials he names to government positions, including the Supreme Court. As a result, the final two years of Mr. Obama's presidency may be his least successful.

election – n. the act or process of choosing someone for a public office by voting

majority – n. a number that is greater than half of a total

advisor – n. one who guides or gives advice

opinion – n. a belief, judgment, or way of thinking about something; what someone thinks about a particular thing

legislation – n. a law or set of laws made by a government