Update Required To play the media you will need to either update your browser to a recent version or update your Flash plugin.
By Jerilyn Watson and George Grow
29 April, 2013

From VOA Learning English, this is SCIENCE IN THE NEWS. I'm Mario Ritter.

And I'm Jeri Watson. Today we tell about an experimental way to cure drug dependency in rats. We also tell about a health threat to one third of all adults. We have a report on a gene that controls the ability of the heart to repair itself. And we report on a competition for researchers with expertise in neurobiology.

Drug addiction might be cured with a simple treatment to awaken a part of the brain of the addict – the person who has grown dependent on the drug. Recently, researchers reported they were able to end drug-seeking behavior in rats addicted to cocaine. They said they did this with laser light by activating a part of the animals' brains known as the prefrontal cortex. 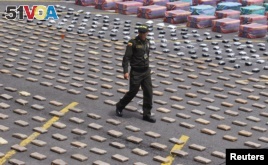 A Colombian police officer walks near packs of confiscated marijuana and cocaine.
Cocaine is used widely as a drug. It comes from a substance, an alkaloid, in the coca plant. For several weeks, the researchers gave the drug to a group of rats. The animals quickly became dependent on cocaine.

For four days, the rats received a mild but unpleasant electric shock to a foot when they attempted to get more cocaine.

Antonello Bonci is scientific director at the United States National Institute on Drug Abuse. He was involved in the study. He says that after the shocks, 70 percent of the rats stopped looking for more cocaine. But the remaining 30 percent continued to show an addictive hunger for the drug.

The researchers compared nerve-cell firing action in both groups of rats by examining cells from a brain area known as the prefrontal cortex. This area is involved in higher brain activity. This includes the making of decisions, controlling unplanned behavior and unwillingness to change one's mind.

Scientists discovered that the addicted rats had reduced activity in a part of the brain cortex called the prelimbic region. The area showed weakness in the self-control processes needed to resist the drug. So, the scientists developed a plan to increase the animal's ability to control itself.

The first step was to inject the brain area with a harmless virus carrying a protein that responds to light. After several weeks, the scientists placed a very small fiber optic device into the prefrontal cortex, and sent light to wake up the sleepy area.

"When we turned on some activity in this prefrontal cortex, we could see that the compulsive cocaine seeking was gone."

He says researchers then turned the process around. The rats that had changed their behavior because of the shocks again became cocaine seekers. This happened because the researchers used the fiberoptic method to reduce neuronal firing in the prefrontal cortex.

Dr. Bonci says investigators are now designing human clinical tests for electromagnetic brain stimulation that is non-invasive. He says they are doing this to increase the hypoactive, or inactive, prefrontal cortex of volunteer drug users.

He says the plan is to set up testing in the near future. In those trials, he says, cocaine addicts ideally should lose their interest and need for the drug.

The heart is our life force. It pumps blood, carrying oxygen to every organ in the body. As the blood flows through the blood vessels, it puts pressure on the vessel walls.

That pressure is often measured when you go to see a doctor or a health care worker. Blood pressure readings are often taken with a cuff, or restraint, tightened around the upper arm.

George Thomas is with the Cleveland Clinic in Ohio.

Stephen Havas is with the University of Maryland School of Medicine. He says both numbers are important.

"Any level above 115 systolic or 75 diastolic increases risk. Each 20 millimeters systolic that you go above that 115, your risk doubles."

Higher numbers are evidence of hypertension, the word that doctors use for high blood pressure. Hypertension is a major cause of heart disease, stroke and death.

Being overweight can also cause blood pressure to rise. Stephen Havas says so can smoking and eating food that contains a lot of salt.

"When I ask people about salt in their diet, they usually say they don't add salt. That's a good thing. But, you should also remember that most salt or sodium comes from processed foods."

The human body needs only 150 milligrams of salt a day. But most Americans take in between three thousand and four thousand milligrams a day!

"The deaths attributed to excess salt consumption represent a huge toll – the equivalent of a jumbo jet with more than 400 adults crashing every day of the year, year after year."

Researchers say they have identified a gene that controls the ability of the heart to repair itself after a heart attack or other injury. The announcement came from scientists at the University of Texas. They had shown earlier that a newborn mammal could regenerate heart cells and repair injuries through cell division. But they found the heart lost that ability as the animal developed.

The scientists found that a gene called Meis1 became very active in heart cells soon after birth, when the heart muscles stop dividing. They soon began wondering about Meis1 and its importance.

The research team removed Meis1 from the heart of newborn mice. They then showed that the period for regenerating cells was lengthened. The researchers were also able to re-activate this regenerative process in adult mouse hearts by removing the gene.

The researchers say the finding could provide a new way to study heart regeneration. In Dr. Sadek's words, "it could introduce a new era in treatment for heart failure." Many researchers currently are studying the possible use of stem cells to replace damaged heart cells.

A report on the University of Texas study was published in the journal Nature.

Eppendorf and the journal Science have begun accepting nominations for the 2013 Eppendorf & Science Prize for Neurobiology. The prize is presented each year for research in neurobiology.

The competition is open to scientists who are 35 years old or younger. A committee of experts will choose the grand prize winner. All nominations must be received by June 15. The winner will receive 25 thousand dollars.

An American scientist won the Eppendorf & Science Prize for Neurobiology last year. Marlene Cohen is an assistant professor in the Department of Neuroscience and the Center for the Neural Basis of Cognition at the University of Pittsburgh. She studies how we use visual images to gather information about the world.

The Eppendorf award committee praised her work. The committee said it provided a new way to study how our mental activity affects what we observe and how mental processes such as attention are controlled.

Marlene Cohen and other researchers trained animals to take a test. The test measured their ability to recognize small changes taking place around them. The animals could see these changes if they examined nearby objects carefully.

The researchers studied nerve cells called neurons in the animals. Neurons process and send information through electrical and chemical signals. The researchers noted changes in the cells when the animals lost interest in an object. They said that when these changes took place, the animals did not perform well and the effect was huge.

Her report was published last year in the journal Science. The magazine's senior editor, Peter Stern, is leading the committee that will choose the 2013 Eppendorf & Science Prize for Neurobiology. Eppendorf is based in Germany. The company develops and manufactures laboratory equipment.

This Science In The News was written by Jerilyn Watson and George Grow and. Our producer was June Simms. I'm Mario Ritter.

And I'm Jerilyn Watson. Join us again next week for more news about science in Special English on the Voice of America.
Related Articles
go top