Update Required To play the media you will need to either update your browser to a recent version or update your Flash plugin.
By Dan Friedell
08 October 2021


A Russian actor and film director left Earth on a spaceship this week to start filming a movie. Russian officials said the movie will shine a light on Russia's success in space.

"We have been pioneers in space and maintained a confident position," Peskov said, adding that space exploration is great for Russia.

Actor Yulia Peresild and director Klim Shipenko took off from a site in Kazahkstan Tuesday with cosmonaut Anton Shkaplerov. They arrived about three hours later at the International Space Station where they will stay for 12 days.

The future film is called Challenge. It tells the story of a doctor who hurries to the space station to help an astronaut with a heart problem.

The passengers had four months to get ready for the space trip. 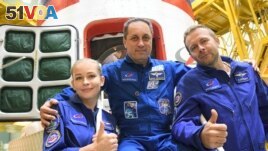 Peresild said training for the trip was difficult. But, she said, once they reach their goal, "all that will seem not so difficult and we will remember it with a smile."

Shipenko said he will finish the movie back home after filming in space. Two other Russian cosmonauts already on the space station will also perform in the movie.

Dmitry Rogozin heads the Russian space agency Roscosmos and has been a major force behind the project.

"Space deserves being shown in a more professional, artful way," he said.

Rogozin said he edited the script himself to correctly represent the realities of space travel. "We describe some real emergencies that may happen out there," he said.

Oleg Novitskiy is an experienced Russian cosmonaut. He will play the character with the heart problem in the movie. When that is done, he will return to captain's seat of the Soyuz spacecraft and bring the actor and director back to Earth.

Dan Friedell adapted this story for Learning English based on a report by The Associated Press. Caty Weaver was the editor.

How do you think the Russian movie will turn out? Tell us in the Comments Section and visit 51VOA.COM.