Harry and Meghan Appear on Time ‘100 Most Influential’ List

Update Required To play the media you will need to either update your browser to a recent version or update your Flash plugin.
By Susan Shand
17 September 2021


Britain's Prince Harry and his wife Meghan were pictured on the cover of Time magazine's yearly 100 most influential people in the world issue.

Harry and Meghan left their royal duties last year and moved to California from London. They launched the nonprofit Archewell Foundation and made agreements to produce TV shows. 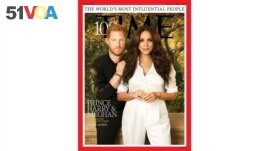 Harry and Meghan one of the 7 covers of Time magazine's 100 most influential people in the world editions in this handout photo released to Reuters on September 15, 2021. TIME/Handout via REUTERS MANDATORY CREDIT

They are shown on one of seven covers showing the most influential people. The photo shows the Duke and Duchess of Sussex dressed casually.

Chef Jose Andres has partnered with the Archewell Foundation. He runs the nonprofit World Kitchen. He wrote in the publication that it would have been safer for Harry and Meghan to stay silent.

Britney Spears made the list for the first time. She has struggled to be removed from a court-ordered guardianship agreement, or conservatorship, that controlled her life and business for 13 years.

Reality TV star Paris Hilton wrote the introduction to Spears. "So, we stand by and hear and root for her as she turns pain into purpose, her unwavering spirit stronger than ever," she wrote.

Seven-time Grammy winner Billie Eilish also was shown on one of the covers. She was introduced by rap music star Megan Thee Stallion, who wrote that Eilish stands up for herself and "for women everywhere."

The Reuters News Agency reported this story. Susan Shand adapted it for Learning English. Mario Ritter, Jr. was the editor.

gymnast – n. a person who performs various physical exercises on a mat or on special equipment as part of an athletic competition

casually – adj. done without much thought, effort, or concern

compassion – n. a feeling of wanting to help someone who is sick, hungry, in trouble

unwavering – adj. continuing in a strong and steady way