John Lennon Collectibles to Go on Sale in Denmark

Update Required To play the media you will need to either update your browser to a recent version or update your Flash plugin.
By Caty Weaver
24 September 2021


A rare audio recording of famed artist and peace activist John Lennon is to go on sale in Denmark on Tuesday. The recording has been privately held for fifty years, by the people who made it. Like many collectibles, this one has an interesting history.

In 1970, four Danish teenagers got to meet privately with British musician and Beatles member John Lennon. They planned to write a story about him for publication in their school's magazine. The boys made a sound recording of the event.

Now, 50 years later, the Danes are putting the 33-minute-long recording up for sale. Included with it are 23 pictures taken by the students and a copy of the magazine in which the story appeared.

Bidding for the set is to open September 28 at the Danish auction business Bruun Rasmussen.

The 16-year-olds were not star-struck when they questioned Lennon that January day in the area of Thy. It was the height of the Vietnam War and the Cold War. Lennon and his wife, artist Yoko Ono, were opponents of both conflicts.

Karsten Hoejen remembers the two had "a message of peace, and that was what was important to us." He recorded the meeting with equipment he borrowed from the local record store.

Lennon and Ono talked with the boys about being in Denmark and world peace, Hoejen said. Communities sympathetic to Lennon's message had spread quickly around Denmark beginning in the late 1960s. People came from other countries, and music festivals were organized.

"Their ... message was what we came for," Hoejen told The Associated Press. The gathering was friendly and easy.

"Lennon and Ono had their feet on the table," Hoejen noted.

Lennon and Ono were on a private visit to Thy at the time, and they tried to keep it that way. But, the local press found out and reported about the presence of the world-famous couple. A press conference was set up and the 16-year-old students were to attend.

But, they arrived late. The official press conference was over. The boys had missed it. Instead, they got something better.

"We knocked on the door" Hoejen recalled. Seconds later they were sitting next to Lennon and Ono. Hoejen held the microphone, and his friend Jesper Jungersen took pictures. 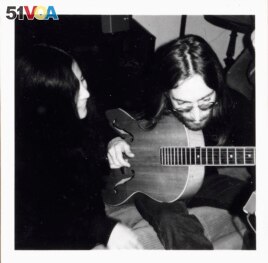 This photo made available on Wednesday September. 15, 2021, shows John Lennon and Yoko Ono in Thy, northern Denmark, January 5, 1970. (Jesper Jungersen via AP)

Someone asked Lennon to play the guitar for the boys. He played and with Ono sang his song Give Peace a Chance. Then the couple sang a song called Peace Radio. It was made for a radio station in The Netherlands but was never broadcast, Hoejen said.

That unpublished song makes the collection of objects more valuable. The collection is estimated to be worth more than $30,000.

The four boys grew up, and over time, realized that they "were sitting on a treasure," Hoejen told AP. After some discussion, they secured the recording in a bank safe.

"A collector or a museum would likely get more of it than us having it in a bank, so we decided to sell it."

The Associated Press reported on this story. Caty Weaver adapted it for VOA Learning English. Mario Ritter, Jr. was the editor.

bid –v. to offer to pay a set price for something

auction –n. a public sale at which things are sold to the people who offer to pay the most

star-struck –adj. a feeling or showing great interest in or respect for famous people

festival –n. a special time or event when people gather to celebrate something

couple –n. two people who are married or have a romantic relationship