Update Required To play the media you will need to either update your browser to a recent version or update your Flash plugin.
By Hai Do
23 February, 2019


NASA reportedly has warned SpaceX and Boeing of its concerns over the design and safety of their astronaut launch systems.

The Reuters news agency says the problems could threaten efforts by the United States to re-start its human spaceflight program later this year.

Reuters says its story is based on information in a new U.S. government report and from people in the aerospace industry.

NASA is paying $2.6 billion to SpaceX and $4.2 billion to Boeing to develop competing rocket and capsule launch systems. The goal is to send astronauts to the International Space Station from U.S. territory. The space agency has not launched astronauts from American soil since the Space Shuttle program ended in 2011. 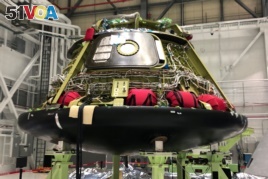 For Boeing, one risk item is the capsule's structure. The safety advisory panel warned it could be damaged when the heat shield is deployed.

The report also noted the redesign of a SpaceX rocket canister. The redesign was ordered after a canister exploded in 2016. The safety advisors also noted concerns about the company's "load and go" process of fueling the rocket with astronauts inside the capsule.

Both companies faced the issue of "parachute performance," when their space vehicles would return to Earth.

The report added, "There are serious challenges to the current launch schedules for both SpaceX and Boeing."

Two people with direct knowledge of the program told Reuters that the space agency is concerned with more than just the four items listed. The Boeing and SpaceX launch systems have already been delayed several times in recent years. But experts said the companies must deal with "most" of those concerns before they can fly astronauts and, eventually, private citizens to space.

NASA official Joshua Finch told Reuters that technical questions about the launch systems should go to Boeing and SpaceX. But he said, "Flying safely always takes precedence over schedule."

Josh Barrett of Boeing said his company has worked on the capsule's structure and completed its structural test program in January. He added that, "Our numbers show we are exceeding NASA's safety requirements."

SpaceX spokesman James Gleeson said the company, working with NASA, has developed "one of the safest, most-advanced human spaceflight systems ever built."

Earlier SpaceX capsules were designed to transport supplies to the International Space Station. The company has since designed a new version to carry people.

Three people familiar with the project said NASA has identified design differences between the two capsules. Two persons told Reuters that there was a concern as to whether the parachute will be able to slow down a capsule enough to ensure the crew's safety.

Gleeson said SpaceX parachute systems are designed so the capsule can safely landed in water in the event one of the parachutes fails. He added that the company has already completed 17 parachute tests for the Commercial Crew Program. And it is planning 10 more.

In its report, the NASA safety panel said that SpaceX may be required to re-design its parachute system. A re-design would likely mean more testing and a longer delay.

NASA also found design problems with the system that keeps SpaceX's capsule in an upright position once it lands in the ocean. The problems could cause the capsule to be flooded with water.

SpaceX's Gleeson said its capsule is designed to be water-resistant and to float on water.

Last June, Boeing had to stop its un-manned test launch when fuel leaked from the engine. Boeing's Barrett blamed the accident on faulty valves. He said Boeing has re-designed the valves, though the new ones must be re-tested.

NASA had announced this month that SpaceX was planning a test of its Crew Dragon capsule without a crew in March and a flight with astronauts in July. Boeing's un-crewed Starliner would fly "no earlier" than April, with the flight involving a human crew planned for August.

The NASA report said this launch schedule is now at risk.

The United States has been paying Russia about $80 million for each American astronaut to fly on a Russian spacecraft to the International Space Station.

NASA said last week it was considering paying Russia for two more seats to the space station for this autumn and spring 2020.

Eric Johnson reported this story for Reuters. Hai Do adapted the story for Learning English. George Grow was the editor.

capsule - n. a small part of the spacecraft where people live and work

shield - n. something that defends or protects something

schedule - n. a plan of the times when something will be done

precedence - n. a condition of being more important than something else

exceed - v. to be greater or more than something

faulty - adj. having a mistake

valve - n. a mechanical device that controls the flow of liquid, gas, etc. by opening and closing