Update Required To play the media you will need to either update your browser to a recent version or update your Flash plugin.
By Christopher Jones-Cruise
01 October, 2017


Educators and volunteers in Egypt are teaching the children of refugee families from many African countries. They are working with the office of the United Nations High Commissioner for Refugees, churches and non-governmental organizations, or NGOs.

Chris Rupke is a teacher at the African Hope School in Ma'adi, a town near Cairo. It is one of about 60 schools in Egypt for refugee children. Rupke told VOA that some of the children he teaches have lost one or both of their parents.

"Nuclear families as we know them in the West are not that common here," Rupke adds.

Rupke says that one boy was so traumatized by what he had seen in his home country that he was unable to speak. Then, a psychologist at the school got him to draw pictures of what had happened.

After he drew the picture and worked with the psychologist, the little boy began to talk.

Jean-Pie has taught at the African Hope School since 2003. The school teaches about 460 students. Jean-Pie told VOA that when he began, he and his co-workers went looking for refugee children under Cairo's bridges and in its public gardens. He learned how to persuade them to come to school. 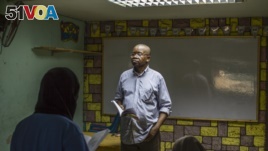 "We have a school here. So we can put you there. It's free," he told them.

"There's food, and when they hear about food, then they come."

Most classes at the refugee schools are taught in English. The students learn math, Arabic, science, literacy, social studies, computers and personal development.

African refugee families often struggle to earn enough money to pay for food. One NGO that is providing aid is Refuge Egypt. The Anglican Church in Cairo operates the group. It gives refugees sugar, flour, cooking oil and free medical treatment at a health clinic it operates.

It can be difficult for many African refugees to stay in Egypt. They must receive an "asylum-seeker card" from the United Nations refugee agency.

A spokesman for the UNHCR Cairo office tells VOA that the card protects refugees from being deported to their home countries.

An agreement between the UNHCR and Egypt reached in 1954 permits refugees from some countries to send their children to Egyptian schools and to receive care at government-operated medical facilities.

But Egyptian government schools are often too crowded to accept many refugee students. And some of the children do not speak Arabic. So it is difficult for them to learn.

Most refugee children like going to school. They love to play with other children and learn. Chris Rupke says teachers work hard and show the students love.

"We do know that the students love to come here, because they know it's a safe place, and it is a place that they will see love."

Christopher Jones-Cruise adapted the story for Learning English. Mario Ritter was the editor.

nuclear (family) - adj. the part of a family that includes only the father, mother, and children — compare

psychologist - n. a scientist who specializes in the study and treatment of the mind and behavior : a specialist in psychology

facility - n. something (such as a building or large piece of equipment) that is built for a specific purpose