Update Required To play the media you will need to either update your browser to a recent version or update your Flash plugin.
By Dan Novak
14 September 2021


Andrew wanted to get a COVID-19 vaccine, but was afraid his parents would not approve. He signed up for a vaccine in secret. Then he told his parents just before he was to receive the vaccine.

But his father told him no. "He said, ‘You're not getting this...vaccine."

Andrew said it was the first time his father had ever done something like that. "He grabbed my shirt and yelled in my face," said Andrew, a 17-year-old student in Hoover, Alabama.

Children under 18 need their parents' permission to get medical treatment such as the vaccine against COVID-19. Students and organizers of campaigns that directly target young people for vaccination efforts are facing reactions from families.

Millions of American students have returned to school in recent weeks. At the same time, the coronavirus continues to spread at high rates in some places.

U.S. President Joe Biden has pushed school districts to persuade students to get vaccinated. Biden's administration has also pushed for clinics in schools that provide vaccines.

But distrust of the vaccine and other concerns remain in communities in many parts of the country. And many state governments and school districts are not pushing the vaccine in some areas for several reasons.

It is estimated that half of people ages 12 to 17 have been vaccinated across the country. That age group has been able to get the Pfizer vaccine since May. Pfizer is currently testing a vaccine for younger children. Last week, the Los Angeles Unified School District school board voted to require vaccines for students 12 and older.

School officials in Kettering, Ohio, said they received death threats in August. They came after social media videos on TikTok falsely claimed the district was vaccinating children without parental permission.

There was no truth to the claims but they caused "huge hysteria" in the community, said Scott Inskeep, the head of Kettering City Schools.

"Our families really are struggling with both information and disinformation," Inskeep said. "It's like a match being put to a gasoline fire. When it starts it's hard to put out."

In some areas, there have been efforts to make it easier for children to get vaccinated.

State lawmakers in New York and New Jersey introduced laws that would permit teens to agree to vaccines without their parents' permission, but they were not approved.

The Washington, D.C. city council passed a law giving young children the ability to make medical decisions, but a group is disputing the law in court. 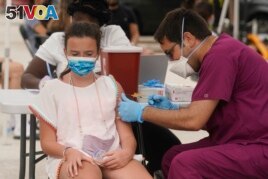 In May, officials in two Oregon counties banned health officials from giving vaccines to underage children without parental permission.

Yamhill County Commissioner Lindsay Berschauer, who is also the mother of three teenagers, said, "Our children are not the property of the State of Oregon."

But the counties removed the ban after state health officials released an opinion saying children 15 and older have the right to make their own health decisions.

Alabama's law permits children like Andrew, who disagreed with his father, to get the vaccine on their own. But in reality, that is almost impossible. The Alabama Department of Public Health requires parental permission. So do large pharmacies.

Andrew's Hoover High School does not push for COVID-19 vaccinations on its website or social media sites. There has been no sign the school will hold a vaccine clinic. The day after their argument, Andrew's father took him to the pharmacy and signed his permission form, without saying a word.

Pediatricians sometimes try to create discussion between children and parents to encourage the use of the COVID-19 vaccine. But it does not always work, even with parents who have accepted a pediatrician's recommendation for other vaccines.

Doctor Katrina Skinner is president of the Alabama Chapter of the American Academy of Pediatrics.

She said some parents look at her like she is feeding their child "poison when I'm recommending a COVID vaccine."

Cedar Attanasio reported this story for The Associated Press. Dan Novak adapted it for VOA Learning English. Mario Ritter, Jr. was the editor.

district –n. an area established by a government for official government business

clinic –n. a place that is smaller than a hospital where people get medical help

outreach — n. the activity of bringing information to people

peer pressure— n. a feeling that you must do the same things that other people of your age and social group do in order to be liked or respected by them

hysteria — n. a state in which your emotions are so strong that you behave in an uncontrolled way

pharmacy — n. a store in which drugs and medicines are sold and prepared

pediatrician — n. a doctor who specializes in treating children

encourage — n. to advise someone to do something