Update Required To play the media you will need to either update your browser to a recent version or update your Flash plugin.
By Bryan Lynn
25 July 2021


Scientists say they have clearly identified for the first time a moon-forming area around a planet beyond our solar system.

The ring-shaped area surrounds an exoplanet called PDS 70c. An exoplanet is a planet that orbits a star outside our solar system.

The identified region is known as a circumplanetary disk. This is an area surrounding a planet where moons and other satellite objects can form. The disk is made up of gas and dust.

Researchers from the ALMA observatory, which operates from Chile's Atacama desert, made the discovery. ALMA is the largest radio telescope in the world.

Astronomers had previously found signs of moon-forming disks around this exoplanet and others. They say, however, that in the past they were not able to clearly differentiate the disk from the surrounding environment. 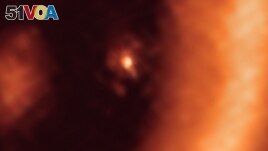 The team says the new finding may help scientists better understand how moons and planets form in young star systems. The results were recently published in a study in The Astrophysical Journal Letters.

Myriam Benisty is a researcher who helped lead the study for the University of Grenoble in France and the University of Chile. "Our work presents a clear detection of a disk in which satellites could be forming," she said in a statement. Benisty added that the ALMA observations provided results of such high quality "that we could clearly identify that the disk is associated with the planet."

PDS 70c is a gas giant discovered in 2019, the U.S. space agency NASA says. It is one of two exoplanets orbiting the orange-colored star PDS 70. The exoplanets sit about 370 light years from Earth. A light year is the distance light travels in a year, about 9.5 trillion kilometers.

Both planets are similar to Jupiter, a gas giant and the biggest planet in our solar system.

The disk's diameter is comparable to the sun-to-Earth distance and has enough mass to form up to three satellites the size of the moon that orbits Earth, the researchers said in a statement.

Scientists say stars are born within clouds of interstellar gas and dust spread throughout galaxies. Leftover material circling a new star can then form a planet. Circumplanetary disks surrounding some planets can similarly form moons.

Scientists have discovered more than 4,400 exoplanets. But no circumplanetary disks had been clearly identified until now because all known exoplanets were contained in "mature," or fully developed, solar systems.

The PDS 70 star -- which has about the same mass as our sun -- is about 5 million years old. The researchers say that is considered very young in cosmic terms. The two exoplanets orbiting the star are even younger.

Both exoplanets are "still in their youth," said study co-writer Stefano Facchini of the European Southern Observatory. He added that the planets were going through a period where their atmospheres are still being built. The researchers said there could be other planets in the system that have not yet been discovered.

Benisty said the long-awaited discovery is important "in order to test the theory of planet formation and directly observe the birth of planets and of their satellites."

Bryan Lynn wrote this story for VOA Learning English, based on reports from Reuters, the European Southern Observatory and the Center for Astrophysics. Susan Shand was the editor.

disk – n. a flat, round shape or object

diameter – n. the distance through the center of something from one side to the other

interstellar – adj. between the stars