Update Required To play the media you will need to either update your browser to a recent version or update your Flash plugin.
By VOA
04 September, 2014

What do actor Jennifer Lawrence, singer Ariana Grande and model Kate Upton have in common? Of course they are all beautiful, successful women in the public eye. But this week they also have something less desirable in common. The three were among 100 famous females to have compromising, private photographs seized from their computer devices. The world found out when the pictures were posted and re-posted on the Internet.

The Federal Bureau of Investigation -- the F.B.I. -- is trying to learn who stole the photos and how. There may be more than one computer hacker involved. What is known is that Apple devices were targeted.

The company's stock value fell by four percent Wednesday. That is about $26 billion in money terms.

Actor Jennifer Lawrence at a movie premier in May 2014

Many experts have blamed security weakness in Apple's iCloud for the cyber attacks. Apple says its investigation so far shows no major violation of any of its systems. It says the hacking resulted from targeted attacks on user names and passwords.

Most of the photographs leaked onto the web show the famous victims with no clothes on, or wearing only a few clothes. The story has raised the expected questions about privacy and security. Many entertainment reporters have criticized the people who posted the photos.

But others in the business say the criticism is unfair. They argue that entertainment publications buy and release similar photos all the time. Howard Kurtz is a media reporter with Fox News. He noted that the website Huffington Post expressed anger about the posted pictures. But Mr. Kurtz pointed out that the Huffington Post itself contains a division of its website for the posting of compromising photos of famous women. 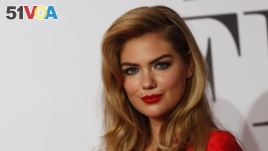 The hacking of so many stars' computer devices did help one group of people. Several television talk show leaders, or hosts, made funny comments about the situation. Conan O'Brien opened his program with a piece about the new iPhone release expected next week. He said the new device will have "a larger screen, more memory, and it can leak celebrity photos twice as fast.

hacker – n. a person who illegally gains access to and sometimes tampers with information in a computer system

cyber – ad. of, relating to, or involving computers or computer networks

host – n. one that receives or entertains guests socially, commercially, or officially