Serbia Aims to Protect Cyrillic in the Age of the Internet

Update Required To play the media you will need to either update your browser to a recent version or update your Flash plugin.
By Phil Dierking
03 September, 2018


When visitors arrive in Serbia, they find that all official signs are written in Cyrillic script.

But while the internet is becoming a popular way to supply information to many Serbs, use of the script is decreasing across the country.

"All younger people are starting to use Latin because of their phones and computers, so I don't know if there is a future for Cyrillic," says Lazar Nikolic, a 14-year-old student.

The Cyrillic alphabet was created in the second half of the ninth century in what is now the Former Yugoslav Republic of Macedonia. Cyrillic is used in Russia, Ukraine, Belarus, Mongolia and a few Central Asian republics. It also is used Bulgaria and some of the countries that formed after the break-up of Yugoslavia: Macedonia, Montenegro, Serbia, and parts of Bosnia and Herzegovina.

Cyrillic was recognized as Serbia's official alphabet in the country's 2006 constitution. It states that communication between public institutions, or between such agencies and the public at large, must be in Cyrillic, except for official communication with "national minorities." 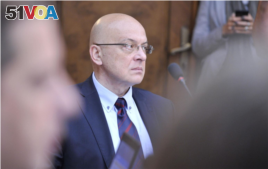 However, the Latin-based script has become so common in Serbia that the government is fighting back.

The Ministry of Culture and Information, led by culture minister Vladan Vukosavljevic, have proposed tightening language laws. The ministry has suggested creation of a Council for the Serbian Language, and fining people "who do not respect Serbia's mother script."

"The Cyrillic alphabet is being used less and less," Vukosavljevic said. "It's not about enacting Draconian measures but about a reasonable correction."

While government buildings have signs written in Cyrillic, Belgrade's business center is full of signs in Latin script.

To fight the Latin invasion, the city government approved measures designed to help businesses that use Cyrillic. Under the plan, companies and individuals who sign rental agreements with the city can save five percent on their rent if their signs are in Cyrillic script.

"Starbucks and McDonald's have their own Cyrillic names in countries where this is the official script. If they feel that this is in their interest, I think it will be accepted," said Andreja Mladenovic, an adviser to Belgrade's Mayor Zoran Radojicic. He spoke to the Beta News Agency.

"The city will look much nicer," Mladenovic added. "This will give a nice picture for our city to foreign tourists. And it's also a way to encourage our institutions to protect the Cyrillic script."

But Ranko Bugarski, a language expert and professor at the Faculty of Philology in Belgrade, is not sure that more laws will make a difference.

Bugarski notes that Cyrillic already has a place in the constitution, while Latin script does not. He adds that, in Serbia, students are first taught Cyrillic characters, and it's almost impossible to finish high school "without a good knowledge" of the alphabet.

"Students in all schools first learn Cyrillic, and only after that Latin. All school textbooks are in Cyrillic. That is already a very strong degree of protection. As long as there are schools in Serbia, people will know Cyrillic..." he told Radio Free Europe/Radio Liberty.

Dunja Jasovic of Belgrade agrees. The 21-year-old student says that she always writes in Cyrillic, a skill she developed during her early years in school.

"Now, when I study at college or write notes, I always use Cyrillic. But online, or when we do something on a laptop, it's always easier to use Latin," she adds.

A majority of Serbia's website publish stories in Latin script. The Serbian National Internet Domain Registry shows that 101,648 websites have been registered on the .rs Latin-script domain. The number seems huge compared to just 2,512 for the register's Cyrillic-script domain.

However, Jasovic says that Serbs should be proud of their language, whichever script is used.

"I think it is a gift that we know both letter types and that we do not make a big difference between them. For some, it's easier to use Cyrillic. Others prefer to use Latin. That's not a deficiency. That's something good."

Alan Crosby and Iva Martinovic reported this story for RFE/RL. Phil Dierking adapted their report for VOA Learning English. RFE/RL and VOA are both part of the U.S. Agency for Global Media (USAGM), formerly called the Broadcasting Board of Governors. George Grow was the editor.

Do you think people should protect their original scripts or change to Latin? Write to us in the Comments Section or on 51VOA.COM.

alphabet - n. the letters of a language arranged in their usual order

deficiency - n. a lack of something that is needed

domain - n. a section of the Internet that is made up of computers or sites that are related in some way

proud - n. very happy and pleased because of something you have done, something you own, someone you know or are related to, etc.

rental - n. something that is paid for in return for being able to use temporarily

script - n. a way that a particular set of letters, numbers, etc., is written or printed