Update Required To play the media you will need to either update your browser to a recent version or update your Flash plugin.
By George Grow
24 April, 2015


The Ebola crisis in Sierra Leone has led to growing concern about another disease: rabies from wild dogs. Many owners fear their dogs could infect them with Ebola, so they have freed the animals. As a result, the stray dog population and number of rabies cases are increasing.

Rabies is spreading in Sierra Leone. The country now has one of the largest stray dog populations in Africa. The situation has become worse during the Ebola crisis.

Doctor Gudosh Jalloh is a veterinarian. In fact, he is one of the country's few trained experts on animal medicine. He also is a member of the Sierra Leone Animal Welfare Society. The group and local partners have launched a public information campaign on how to care for dogs in the time of Ebola. 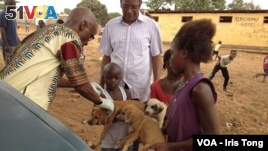 Dr. Jalloh estimates there are about 500,000 stray dogs in Sierra Leone. That is double the number before Ebola became a health issue in West Africa. He says one reason for the increase is dog owners dying from Ebola. He says when owners die, other people do not want the dog because they fear it might infect them with the Ebola virus.

Yet health officials in the United States have found that dogs can carry the virus, but cannot infect people. That information comes from the U.S. Centers for Disease Control and Prevention.

Dr. Jalloh has been traveling around Sierra Leone, telling people that they cannot get Ebola from dogs. He also says there is concern about rabies increasing with this overpopulation. For years, he has been giving free rabies vaccines to protect people from the disease. He also performs operations to keep the animals from reproducing. His efforts depend mainly on international financing.

During the Ebola crisis, the rabies vaccine was not available in the country for several months because airline companies canceled flights to Sierra Leone. Only recently has he received a rabies vaccine.

"What we really need to do now is to do humane dog population control, which will include vaccination, sterilization and, when necessary, humane culling."

Mabinty Kamara works with the Freetown city council, which is a partner in the campaign. She says another goal is to reduce animal abuse by making sure communities understand the importance of dogs.

"These animals are very useful to us. You know, at night, we have thieves coming around and dogs will bark at them, so they will be scared. So it is very, very important for us to take care of these animals."

Ms. Kamara says reaction from the communities has been good. She says most people are following the safety campaign's advice.

Dr. Jalloh says he will continue to do this kind of work because of his strong interest in animals.

crisis – n. an extremely important time when something may become much better or worse; a dangerous situation

population – n. all the people (or animals, in this case) in a place, city or country

partner(s) – n. people or organizations taking part in some activity in common with another or others

overpopulation – n. a situation in which too many people or animals live in a given area