Update Required To play the media you will need to either update your browser to a recent version or update your Flash plugin.
By Bryan Lynn
03 August, 2019


A major demonstration in solar sailing has been declared a success by the organization that launched the experiment. 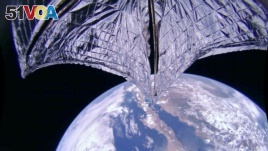 This image was taken during the LightSail 2 sail deployment sequence July 23, 2019. Baja California and Mexico can be seen in the background.

Solar sailing is a method that can push a vehicle through space. A spacecraft is attached to a solar sail to capture wind pressure from sunlight. Light is made up of particles called photons. Photons themselves do not have any mass. But when they travel through space, they can create pressure as a force for movement.

LightSail 2 is a small spacecraft that weighs about five kilograms. It was designed by the Planetary Society, a not-for-profit group. It launched into orbit in June from a rocket built by American technology company SpaceX.

"This is a very exciting day for us, and for me personally," Planetary Society chief Bill Nye said in an announcement about the experiment. "This idea that you could fly a spacecraft with nothing but photons is surprising, and for me, it's very romantic that you could be sailing on sunbeams."

The project team said it had confirmed that sunlight was responsible for moving the spacecraft to an orbital high point of about two kilometers. It was the first time solar propulsion was successfully demonstrated in Earth's orbit.

But the technology has been tested before. In 2010, Japan's Aerospace Exploration Agency launched a spacecraft called IKAROS. The agency used a solar sail to propel the craft past Venus and into orbit around the sun.

LightSail 2 is a $7 million project paid for by Planetary Society members, as well as citizens who donated to a special campaign.

The goal of LightSail 2 is to demonstrate that solar sails can be used to propel small satellites called CubeSats. These small satellites can carry scientific instruments like cameras. Another main goal is to test the power of sunlight to propel spacecraft without the need for costly rocket fuel.

Nye added: "Space exploration brings out the best in us."

Bryan Lynn wrote this story for VOA Learning English, based on reports from the Planetary Society, Reuters and VOA News. was the editor.

photon – n. a very small piece of matter that is the basic unit of electromagnetic energy

sunbeam – n. a beam of light from the sun

propulsion – n. the force produced by a system for moving, or propelling, a vehicle or other object