Update Required To play the media you will need to either update your browser to a recent version or update your Flash plugin.
By VOA
02 April, 2014

South Africa has 11 official languages. If you want to say hello, it's "sawubona" in Zulu, and "hallo" in Afrikaans. Now, South Africa's school children may start using "ni hao" to say hello. 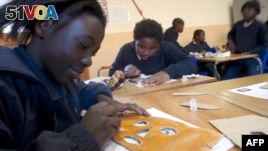 Schoolchildren attend classes at the Sacred Heart College in Johannesburg.

The country's education minister says, the nation is adding the Mandarin language teaching in some schools. Mandarin is the official spoken language of China. That country is a major trading power for South Africa.

A recent agreement between the two nations centers on five areas of cooperation. They include development in basic education, school books and lessons, mathematics and science, teacher training and career education and research.

South Africa officials have not said how much they teaching Mandarin will cost. Troy Martens is an officials with South Africa's Ministry of Basic Education. She says the new partnership is extremely valuable.

"So it is very exciting and both countries have indicated that for them education is a high priority, and that is why education is high on the agenda of collaboration between the two countries," said Martens.

The part of the plan that has garnered the most attention is the inclusion of the Mandarin language in schools.

A public opinion study last year found that South Africans have mixed feelings about China. The survey showed 46 percent of South Africans do not like the spread of Chinese ideas and customs in their country, the results also showed that 60 percent dislike Chinese music, movies and television.

But Ms Martens said Chinese trade is more important than those feelings. She said it is extremely helpful to learners in South Africa to study Mandarin as well as Chinese culture. And she said not every school will offer Mandarin.

South Africa's population studies do not say how many native Chinese speakers are among its nearly 51 million people.

Ms Noonan says the school welcomes the new cooperation between South Africa and China. She said it is in the best interests of children to study Mandarin. She said that especially true with China becoming what she called "a huge economic power in the world".

South African schools suffer from the country's history of apartheid.