Update Required To play the media you will need to either update your browser to a recent version or update your Flash plugin.
By VOA
26 February, 2014

This is the Education Report.

Sahnun Mohamud has never lived in Somalia, but the 21-year-old student has help established an organization that supports aid projects for the east-African country. Sahnun Mohamud is a co-founder and director of a group called Students for Somalia. He is following the humanitarian example of his mother.

Mr Mohamud attends William & Mary College in Williamsburg, Virginia. It is a long way from Somalia. However, that coastal nation is home to many of his relatives. His parents were born there. His mother, Filsan Darman helped start the non-profit agency Aadamiga Somalia, it provided for aid to Somalia in 1987. 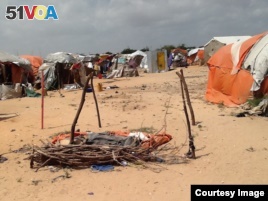 Students for Somalia are helping women at the Hidaya Camp, located at the outskirts of Mogadishu, by giving them modest business loans, as long as they agree to keep their children in school. (Photo courtesy of Filsan Darman)

Filsan Darman said the agency provided food and clothing to Somali people. They had flet to the Somali capital Mogadishu to escape variance in the North.

Sahnun Mohamud phrased his mother's service, "She's been helping Somalia since before I was born."

Mr Mohamud became involved in Humanitarian projects early in life. One of his goals for starting Students for Somalia was to get more non-Somalis to take part in helping Somalia. He noted that many Somali aid organizations have only Somali members.

"So my group and my whole motto has been let's let every ethnicity and race help Somalia. I think it's a huge resource to have non-somali people helping Somalia," said Mohamud.

This year, Students for Somalia and Aadamiga are cooperating on a project to fight poverty and increase education. Mr Mohamud said the groups loan money to women who have lived a long time in refugee camps in Mogadishu. They use the money to start or support businesses like small food stores. The women must have a child in school in Somalia to receive the money.

The loans are small, from 100 dollars to 500 dollars. The woman must keep her child in school as a loan condition. She also must pay back the loan, but Mr Mohamud says the woman does not return the loan money to the lender. Instead, she gives it to her child's school. That way, he says, the school can make improvements.

"So it's really about education and keeping kids in school," said Mohamud.

Mr Mohamud says Students for Somalia centers its efforts on education. He says education provides a long lasting solution to most of the country's problems. He says young people will not have to leave school to work if their mother's businesses are successful. He also believes it will help prevent them from becoming child soldiers for armed groups.