Update Required To play the media you will need to either update your browser to a recent version or update your Flash plugin.
By Anna Matteo
12 November, 2018

For some parents, spanking a child who misbehaves is a common punishment. In fact, they may think that a physical type of punishment is good for children and will teach them to behave in the future.

However, a leading group of child health specialists suggests that the opposite is true. These experts say that spanking is not only ineffective, it may even cause long-term harm to the child. 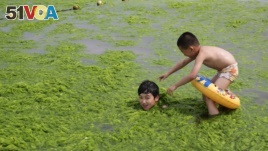 The American Academy of Pediatrics recently amended its policy on physical punishment for a child.

Released in October, the academy warns that spanking a child can long-term effects. These effects include "aggression, brain changes, substance abuse and suicidal behavior in adulthood."

The report admits that not every child who is spanked will have these problems later in life. It makes this observation: "Although many children who were spanked become happy, healthy adults, current evidence suggests that spanking is not necessary and may result in long-term harm."

In recent years, many American experts have been advising parents against the use of physical punishment. Many other countries have already banned corporeal punishment. Sweden was the first nation to do so in 1966.

Earlier studies have shown that corporeal punishment can also affect a child's ability to think and learn.

In 2012, a Canadian study found that spanking children can cause long-term developmental damage and may even lower a child's intelligence test scores.

Joan Durrant of the University of Manitoba is an expert in child development and how violence affects children. She was one of the authors of this report. Her co-author was Ron Ensom, with the Children's Hospital of Eastern Ontario in Ottawa.

Durrant and Ensom studied 20 years of published research on the long-term effects of physical punishment. They found that such punishment makes children more aggressive and antisocial. They wrote that violence affects development in the brain and its ability to work properly. They also found that it can lead to depression and drug abuse.

A report on this study and its findings were published in The Canadian Medical Association Journal.

The American Academy of Pediatrics also warns against using strong verbal abuse or shame to discipline a child. These types of punishment can also cause long-term problems for a child.

Instead, they suggest other types of punishment that are appropriate for the age of the child.

For younger children, punishment could be taking away a favorite toy. For older children, a parent can limit the time the child spends watching television or playing with computers or electronic games.

Anna Matteo wrote this story using reports from the Associated Press and Reuters. George Grow was the editor.

spanking - n. the act of striking someone else, usually on the person's bottom

discipline - n. orderly or prescribed conduct or pattern of

corporeal - adj. having, consisting of, or relating to a physical material body

score - n. the number of points that someone gets for correct answers on a test, exam, etc.

author - n. one that originates or creates something

verbal - adj. of, relating to, or consisting of words

shame - n. a feeling of guilt, regret, or sadness that you have because you know you have done something wrong

toy - n. something for a child to play with