The number of buses, taxis and other vehicles on Kenya's roads is growing every day.

Now, the country's first electric-powered motorbike is being made. The bike is designed to cut down on pollution and aimed at low-income communities.

Most motorbikes used in Kenya depend on gasoline as fuel. But not this new motorbike. Its energy comes from sunlight.

Three university students developed the new ecotran bike. It captures the sun's energy, stores it in batteries and uses it to charge the electric motor. 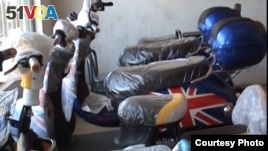 The first electric-powered motorbike is on the road in Kenya. Designed by three Kenyan students, the motorbike is called ecotran.

Robert Achoge is one of the student inventors.

"Our hope is that by the fifth year, we will be able to cover the whole of Kenya with the electric motorcycle so as to conserve the environment and provide affordable transport."

The students have set up a ‘fueling' station for the motorbikes in Nairobi. Riders can plug the bikes into any electrical outlet. The small battery can run for 70 kilometers when fully charged. Once the power is used up, the motorbike has to return to the fueling station while another charged battery is connected to the bike.

The U.S. African Development Foundation is providing financing for two solar-powered charging stations in the Kenyan port of Kisumu.

Each ecotran bike costs about $700. One motorcycle taxi operator says the new bike costs less to operate than bikes running on traditional fuel.

"When it comes to buying fuel there's no need. It's basically good for various errands. Even though you won't carry quite a heavy load, you can go with it anywhere."

A Nairobi dealership is selling the ecotran bikes. Businessman Kennedy Kusimba hopes they will become popular.

"We also know they are more reliable compared to the gas-powered bikes. They are more efficient and they tend to last longer."

Lenny Ruvaga reported on this story from Nairobi. Marsha James adapted his report for Learning English. George Grow was the editor.

Do you use a car, motorbike, bicycle or your feet to get around? Let us know on 51VOA.COM!

income – n. money that is earned from work, investments, business

gasoline – n. liquid made from petroleum and used as a fuel for engines

batteries – n. a device that is placed inside a machine to supply it with electricity

conserve – v. to use something carefully in order to prevent loss or waste

affordable – v. to be able to pay for something

outlet – n. a device in a wall into which an electric cord can be plugged in order to provide electricity

basically – adv. In a general or basic way

various – adj. different from each other

errand –n. a short journey that you take to do or get something

quite – adv. to a very noticeable degree