Students Learning English Had a Difficult Time During the Pandemic

Update Required To play the media you will need to either update your browser to a recent version or update your Flash plugin.
By Dan Novak
09 November 2021


A research center has found that students learning English as a second language, or ESL, struggled during the coronavirus health crisis.

Last month, the WIDA consortium, a research group based at the University of Wisconsin, released a study on ESL students. It found English proficiency and growth in English studies decreased during the 2020-2021 school year. WIDA provides standardized tests to English learners in 36 states. State and federal law requires ESL students to be tested from kindergarten through 12th grade. The WIDA test is used to find out if a student should remain in ESL classrooms or join the general student population. 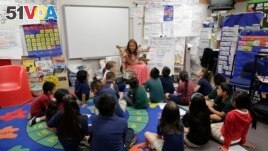 In this Thursday, May 23, 2013 photo, first grade teacher Lisa Cabrera-Terry, center, leads the class in a reading exercise at Jay W. Jeffers Elementary School, in Las Vegas. Eighty three percent of the incoming kindergartners at the school don't speak En

Educators and school officials say that online classes made it more difficult for ESL students to use English when it was not spoken at home. Students did not have a full day of schooling in English online, said Dessynie Edwards. She is the assistant superintendent of Austin Independent School District in Texas. But she expects student performance to improve this year now that classes are returning to normal.

There were some limits to the WIDA data however. WIDA required its tests to be taken in-person, even in districts where classes were online. That may have been the reason why 30 percent fewer students took the WIDA test in 2021 than in 2019 and 2020.

Because of the pandemic, students were also tested at irregular times. Instead of being tested every 12 months, students took the test between 9 and 15 months apart. And students who took the test one year, might not have taken the test again.

The total number of students in the study was also low, said Leslie Villegas. She is with the New America Foundation, a public policy research group in Washington, D.C. Students from Texas, California and New York do not take the WIDA test and are not included in the data. However, those three states have the highest numbers of ESL students.

Villegas said the study provides some useful information but that educators should be "careful" about forming opinions from it. The information is "definitely not representative of all (English learners) in the country," Villegas said. "I think we need to keep that in mind." Students may not have been in a good academic position before the pandemic either, she said.

For example, Edwards said there is a "gap" in data about ESL learners' performance and participation rates in Austin. While Texas has a statewide test to measure performance, the test was not required for all students last year.

"I would not use (2021) test data to say, ‘Oh, this is where we're going as a nation,' other than to see if it aligns with something that we have some evidence of locally," Kristina Robertson told the publication Education Week. Robertson is the head of ESL programs at Roseville Area Schools in Minnesota.

Villegas said states should look at their own test scores and information to find out where to place their resources to best serve their students.

"The onus is not on students," she said. "The onus is on the system to figure out where the need is and target resources and attention and support to those areas."

standardized — adj. done in a regular way to ensure that all examples are the same

district — n. an area established by a government for official government business (such as public schools)

participation –n. to be involved in doing something with others

align — n. to cause something to agree or support something else

onus — n.. a responsibility for something

figure out — v. (phrasal) to understand or find something by thinking