Study: Half of US Deaths from Pollution Linked to Out-of-State Emissions

Update Required To play the media you will need to either update your browser to a recent version or update your Flash plugin.
By Ashley Thompson
23 February 2020


A new study looks at air pollution and its effects on premature deaths in the United States. Premature deaths are defined as those that take place before the average age of death.

Researchers found that half of all such deaths related to air pollution resulted from pollution that came from another state.

The study is the first to estimate how pollution crossing state lines affects early deaths, says Steven Barrett. He is a professor at the Massachusetts Institute of Technology and a co-writer of a report on the study. 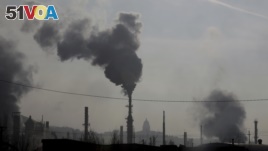 FILE - In this Dec. 10, 2018 photo, smokestacks near an oil refinery are seen in front of the Utah State Capitol as an inversion settles over Salt Lake City.

Worldwide, an estimated 4.2 million premature deaths are linked to outdoor air pollution. Most of those deaths are from heart disease, stroke and lung disease, as well as acute breathing infections in children, reports the World Health Organization.

Efforts to deal with outdoor air pollution have largely centered on relationships between local sources of pollution and local air quality. But Barrett and other researchers found that, in the United States, cross-state pollution is a major concern.

"Pollution is even less local than we thought," Barrett said.

The computer model his team developed for the study looked at the atmospheric chemistry processes and weather conditions over an 11-year period. It then tied that information to information on human exposures and health risks.

The researchers then examined how each of the lower 48 states affects pollution and people's health in every other state.

The model included records from 2005, 2011 and 2018 on different sources and kinds of pollutants. The pollution came from seven producers of emissions, including electric power stations, road transportation, shipping, railroads and airplanes.

The team found that electric power plants -- which release sulfur dioxide -- were the biggest contributor to deaths related to pollution from other states. In 2005, sulfur dioxide from power plants was involved in 75 percent of cases of premature deaths from out-of-state pollutants.

Not all states contribute to the problem equally, the study showed. Many states in the northern, middle part of the country, such as North Dakota, are "net exporters" of pollution-related health effects. That is in part because of their low populations in comparison to the amount of pollution they create.

Many states on the east coast are "net importers" of air pollution. New York is hit especially hard, with 60 percent of early deaths related to air pollution coming from out-of-state emissions.

"This is a great study," said Muennig, who was not involved in the research.

A notable limit, he said, is that the information is based on models, which can be complex and more likely to contain mistakes.

Barrett said the researchers tried to measure areas of uncertainty in the models.

He said, "Like with climate change, not knowing the exact number doesn't mean you don't take action, because uncertainty cuts both ways and reality could be worse than our central estimates, as well as better."

Barrett added that the team has a large amount of data that policymakers could use to try to lower the number of deaths.

The study was published this month in Nature.

The Reuters news agency reported this story. Ashley Thompson adapted it for VOA Learning English. George Grow was the editor.

source –n. where something comes from

exposure - n. the act of coming into contact with some substance

contributor - n. something that provides or adds to a condition or situation

net - adj. describing an amount that has all reductions and additions accounted for

emissions - n. pollution or gasses that are released from factories or industrial centers

uncertainty –n. a condition of not being sure about something