Study Suggests People Who Got COVID-19 Protected for Months

Update Required To play the media you will need to either update your browser to a recent version or update your Flash plugin.
By Alice Bryant
29 November 2020


People who have had COVID-19 are unlikely to get the disease again for at least six months after their first infection, new research suggests.

Researchers studied 12,219 British healthcare workers involved in treating people infected with the new coronavirus. COVID-19 is the disease caused by that virus. 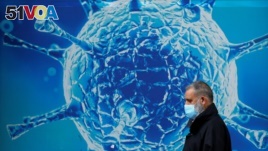 A man wearing a protective face mask walks past an illustration of a virus outside a regional science centre. (REUTERS/Phil Noble)

The findings could be important for tens of millions of people worldwide who have been infected, researchers at the University of Oxford said.

"This is really good news, because we can be confident that, at least in the short term, most people who get COVID-19 won't get it again," said David Eyre. He was one of the leaders of the study.

Rare cases of re-infection had caused concern that immunity from the virus might not last and that recovered patients might get sick again.

But the results of the study suggest cases of reinfection are likely to remain extremely rare. The study was carried out on healthcare workers who are among those at highest risk of getting COVID-19.

"Being infected with COVID-19 does offer protection against re-infection for most people for at least six months," Eyre said. "We found no new symptomatic infections" in any of the workers who had tested positive for antibodies.

The study is part of a major employee testing program. It covered a 30-week period between April and November 2020. The results have not yet been studied and confirmed by other scientists but were published early on the website MedRxiv.

Eyre told Reuters news agency that the researchers would keep watching the workers carefully "to see how long protection lasts." And they will watch to see whether an earlier infection affects the severity of a new infection.

confident –adj. have the belief that something will happen or is true

immunity –n. protection from being affected by infectious disease

symptomatic –adj. showing that a disease is present, showing signs of disease

positive –adj. showing that a chemical, substance or germ is present