Who Eats the Most on Thanksgiving? These Americans

Update Required To play the media you will need to either update your browser to a recent version or update your Flash plugin.
By Mary Gotschall
25 November, 2015


Many Americans spend Thanksgiving with family and friends around a table of roast turkey, sweet potatoes and cranberry sauce.

But for others, it's a competition.

Across the United States, there are contests to see who can eat the most pumpkin pie. These events start in October and continue through Thanksgiving.

Elk Grove, California hosts the Giant Pumpkin Festival World Pumpkin Pie Eating Championship. Matthew Stonie won last year by eating 20 pounds, 13 ounces of pumpkin pie in 8 minutes. In other words, about 9 and a half kilograms. That was a "world record," reported the International Federation of Competitive Eating in New York City (IFOCE). 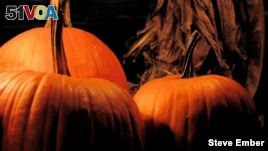 The IFOCE website praised Stonie's "effortless speed" at the table:

"Like a silent automobile in top gear careening past you on the highway. Like the boxer with lightning jabs. Like a speed skater in a very tight bodysuit, long limbs stretching further than the clock can tick. The great ones make it look easy."

Some of the pumpkin-pie eating contests dissolve into gluttony. An example is the IFOCE's YouTube video: "Thanksgiving Invitational – Pumpkin Pie" eating contest:

In Broomfield, Colorado, their Turkey Day celebration takes a more health-conscious approach. They hold a pumpkin pie-eating contest, but contestants just have to eat one piece of pie (or about one-sixth of a pie) as fast as possible. There's a 5 kilometer and 10 kilometer "Turkey Day" race afterwards, for those who want to run off excess weight.

And at Pumpkin Palooza -- a pumpkin pie-eating contest in Sparks, Nevada -- the organizers note on their website:

"The winners are chosen by audience applause, so style, flair and humor count as much as anything."

Do you have an opinion about this topic? Let us know what you think in the comments section below, or on our 51VOA.COM.

potatoes – n. a round root of a plant that has brown, yellow, or red skin and white or yellow flesh and that is eaten as a vegetable

cranberry – adj. a small, dark red berry or the plant that produces it

contests – n. an event in which people try to win by doing something better than others

boxer – n. someone who participates in the sport of boxing

skater – n. a person who skates on ice

gluttony – n. the act or habit of eating or drinking too much

applause – n. a show of approval or appreciation at a play, speech, sporting event, etc., in which people strike their hands together over and over

flair – n. an unusual and appealing quality or style