Things to Do After You Study

Update Required To play the media you will need to either update your browser to a recent version or update your Flash plugin.
By John Russell
02 June 2020


Many students study with little thought about what comes after their study session.

But what you do after studying could have an effect on how well you learn and remember new information. 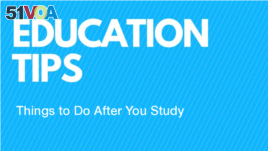 Things to Do After You Study

Today on Education Tips, we will explore two no-cost ways that can help you improve your learning: wakeful rest and sleep.

When many students finish studying, they often go straight to another activity. Perhaps they look at their phone or computer. They might even play a video game or watch television.

But research suggests that resting after you study may help you remember what you studied.

The basic idea is this: by reducing your activity after the study session, your brain gets a chance to rest. Resting is difficult when you have too much stimulation from electronic devices, games, lights and so on.

While this might sound unusual to you, many studies have explored the benefits of resting after learning – what is called "wakeful rest."

A study published in the Journal PLOS One examined how well older people who were in good health could remember certain words. In two different experiments, researchers found that older adults who rested for 10 minutes after learning new words had better memory of those words. "A period of wakeful rest immediately after new learning boosts free recall of verbal material," the researchers wrote.

The results were strong even after seven days, they added.

A 2019 study found that both young and older adults were able to better remember, or recollect, information from prose passages after doing wakeful rest. The findings appeared in Neuroscience Letters.

If you want to give "wakeful rest" a try, here are a few simple things to do. Rest quietly for five to ten minutes. Do not look at your phone, read stories or play games. Just limit the amount of stimulation you get. It is really that easy!

In addition to wakeful rest, sleep is also important for learning.

The Division of Sleep Medicine at Harvard Medical School notes that sleep helps people to learn in two ways. A report on the school's website explains that "a sleep-deprived person cannot focus attention optimally and therefore cannot learn efficiently." It also says, "sleep itself has a role in the consolidation of memory, which is essential for learning new information."

Robert Stickgold is a doctor and sleep expert at Harvard Medical School. Speaking with the U.S. National Institutes of Health, or NIH, he noted that new memories can be hard to keep. "When we first form memories, they're in a very raw and fragile form," he said.

Sleep is important for forming memories. Stickgold told the NIH "you get very little benefit from cutting corners."

The National Sleep Foundation suggests that adults between the ages of 18 and 64 get between 7 and 9 hours of sleep per day. Teenagers may need slightly more, and people over the age of 65 may need a little less.

Now you have two suggestions for how to learn new information.

Try to get some "wakeful rest" after a study session. Then try to get a good night's sleep.

That's it – a simple, no-cost way to help you remember what you learn.

You can include the ideas we discussed today with ideas we explored in other Education Tips stories. On those programs, we discussed what you can do before and during a study session to improve your learning.

session – n. a period of time that is used to do a particular activity

stimulation – n. the action of fueling interest or activity in the body

benefit – n. a good effect or profit gained from something

boost – v. to increase or improve

prose – n. written or spoken language in its most simple form

focus – v. to cause (something, such as attention) to be directed at something specific — + on

consolidation – n. the act of making something stronger or more secure