Update Required To play the media you will need to either update your browser to a recent version or update your Flash plugin.
By Dan Friedell
09 February, 2017

Judge Frank Caprio is a celebrity in the city of Providence, Rhode Island.

And, he is starting to get noticed around the world, too. 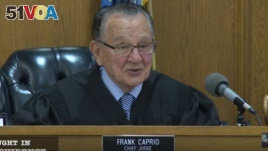 Frank Caprio is famous for his viral traffic court videos. His last video has been played over 1 million times.

Caprio is an 80-year-old judge in the capital city of Rhode Island, the smallest state in the U.S.

One of his jobs is to preside over traffic court. That involves talking to people who have gotten traffic tickets for going through red lights or parking illegally.

They go to traffic court to dispute the tickets.

Caprio hears what they have to say. Then, he decides whether or not the ticket is valid.

Caprio recently heard the case of a young man who was driving his mother's car. He went through a light after it turned red. After he spoke with the high school student, Caprio decided to let him off with a warning -- if he promised to go to college and graduate.

Another video from the Providence traffic court came out earlier this week.

It showed a woman speaking with Judge Caprio about a parking ticket.

She went to traffic court after getting a ticket for parking in an area that only permitted parking after 10 a.m.

The woman said the clock in her car showed 10 a.m., so she thought it would be OK.

After some conversation, the judge decided to dismiss the ticket.

But Caprio did tell her, "You violated the city ordinances." He held up a large book of rules. He smiled and the woman laughed.

He said: "Our parking enforcement officers are second to none in the country!"

After talking with the court officer, he said "I think 9:59 is close enough. Matter is dismissed."

The video was viewed over 1 million times in just two days. It became a trending video on YouTube.

One person wrote of the video: "This is so cute. What a great judge. Playful defendant. LOVE THIS"

Others wondered if the video was real, because it seemed so funny.

But, there actually are judges out there like Frank Caprio. He is as real as they come.

What did you think of Judge Caprio and his courtroom? Let us know in the comments section.

preside – v. to be in charge of something (such as a trial)

ordinance – n. a law or regulation made by a city or town government

cute – adj. the state of being famous or celebrated