Update Required To play the media you will need to either update your browser to a recent version or update your Flash plugin.
By VOA
21 September, 2014


The United States and other nations have agreed to work together to oppose the Islamic State militant group. The group now controls parts of Iraq and Syria.

This week, two Iraqi girls won a personal victory by escaping from Islamic State militants. Here is part of their story.

Samira, age 17, and Samia, 14, are members of Iraq's non-Muslim Yazidi minority. They and other Yazidis were forced from their homes in the northern Iraqi town of Tal Azar last month. At the time, Islamic State forces were moving through the area. The Yazidis decided to stop at a well to get water. But soon the Islamists surrounded the group. 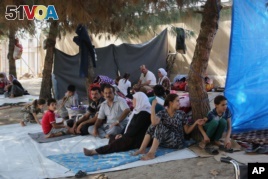 Displaced Iraqis from the Yazidi community gather at a park near the Turkey-Iraq border in Aug. 15, 2014. (AP Photo/Khalid Mohammed)

The militants separated the men from the rest of the group. Samia and Samira were placed in trucks with other women and children. Their truck and other vehicles passed through several towns before reaching Mosul. There they were moved from place to place.

Samira said that every time militants moved the group, some people were taken away. She said their captors told them they were going to be taught the way of Islam. Then all the girls were separated from the women.

"One of their sheikhs came and told us that we would be sold on the market, married to their men and be converted to Islam," Samira says. "He said those who don't convert will be killed."

The leader of the militants would then bring different groups of men. Each time, the men would take several of the girls away.

Samira and Samia spent more than two weeks in Mosul, until one day the girls were given to two men and taken south to Fallujah.

For one week, a group of men kept Samia and Samira in an empty house in Fallujah. The girls said they were beaten during that time, but they resisted sexual attacks.

The girls, however, were planning their escape. In the house, they found traditional women's clothing and, more importantly, a knife. When they were left alone one night, they broke open the lock on the door and fled.

Friends of friends gave them shelter in Fallujah. They helped the girls get a driver and false documents to get through security positions around Baghdad. Members of the Yazidi community took them in and sent them home.

The human rights group Amnesty International has accused the Islamic State of carrying out a violent campaign against all people who are not Arabs or Sunni Muslims. The group calls it "ethnic cleansing on a historical scale." Ethnic cleansing is the attempt to completely remove an ethnic group from an area.

Some estimates claim there are thousands of victims of the Islamic State group. Reports from those who escaped the militants that captured Samira and Samia say men and boys seized by the IS are often killed.

Serra Sippel says the IS uses rape as a tool to punish women and defeat communities. Serra Sippel is president of the Center for Health and Gender Equality in Washington. She says forced marriage is just another form of rape.

Ten Sunni Arab nations have promised efforts to oppose the Islamic State militant group. These efforts are described in terms of national security and fighting terrorism, but not in fighting abuse.

Imam Mohamed Magid is president of the Islamic Society of North America. The group is the largest and oldest Muslim American organization. He says it is the duty of Muslims around the world to speak out against violence and abuse against minorities and women.

Some argue the task has become urgent because the IS uses the media to gain sympathizers. Last week, a teenage girl from the United States told a court that she was guilty of trying to join up with an Islamic State fighters online.

Adel Iskander is with Simon Fraser University in Vancouver, Canada. He says more needs to be done to oppose the militant group's media campaign and show its true nature. He says the group uses media to create fear in the hearts of its enemies while abusing Islamic teachings to get young volunteers.

Imam Mohamed Magid warns that the news media should not call the group the Islamic State. He says this could cause the public to believe that the militant group actually is a state. In his words, "They should name it as it deserves to be called a cult of terror."

militants - n. someone active in trying to cause political change by the use of force or violence

shelter -n. something that gives protection; a place of safety

communities - n. a group of people living together in one