How Did You Get so Intelligent?


You may have heard people say that hard work is more important than the intelligence you are born with. Recently, researchers noted changes in the brains of individuals immediately after they were told this.

Hans Schroder led a study at Michigan State University. Mr. Schroder is a student at the university. As he noted, whether or not what people were told was true, "giving people messages that encourage learning and motivation may promote more efficient performance."

In the study, two groups read different stories about intelligence. One story said intelligence levels are a product of our genetic material and cannot be changed. The researchers called this, the "fixed mindset." The other story discussed how difficult living environments probably made individuals like Leonardo da Vinci and Albert Einstein highly intelligent. Researchers called this the "growth mindset."

Later, the researchers tested the groups' members on what they had just read. Mr. Schroeder and his team watched their brain activity as they answered questions about the main subjects in the story.

The researchers say they found that small messages about our abilities can have a big effect on our beliefs about what we are able to do. 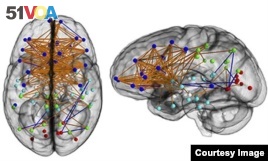 The people who read that intelligence comes from genes worked to answer the questions correctly. But their test results did not improve on later exams.

But the opposite was true among those who read that intelligence can come from hard work. They showed what the researchers called a more efficient brain response after they were told their answer was wrong. This suggests they thought they could give the correct answer on the next test. And the more these individuals thought about their mistakes, the faster they answered the questions on the next test.

The researchers say the study showed that those who had a growth mindset made efforts to improve and adapt. They say even a small amount of time spent on changing the mindset, or beliefs, of individuals can affect how their brain operates. In their words, "messages about how much our abilities can change affect learning, achievement, and performance."

The study was published in the journal Biological Psychology.

study - v., to make an effort to gain knowledge by using the mind; to examine carefully

different - adj., not the same

effect - n., the result or change caused by something -- "The storm had a serious effect on the economy."

correct - adj., true; free from mistakes; v., to change to what is right