Update Required To play the media you will need to either update your browser to a recent version or update your Flash plugin.
By VOA
19 September, 2014


Many Indonesians are talking about a bill under consideration in parliament. If approved, the measure would end direct elections for local mayors and governors in the country. Critics say democratic gains made over the past 10 years would be reduced under the proposed law.

Two months ago, Indonesians elected Joko Widodo to be the country's next president. The president-elect once served as a small-town mayor before becoming the governor of Jakarta.

Now, the Indonesian parliament is considering a bill to end direct elections at the local level. Under the proposal, political parties – not voters -- would elect local mayors and governors. 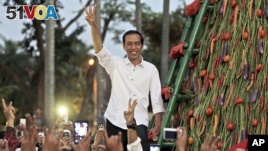 Indonesia has used direct elections to fill local and area government positions since 2005. Those votes have been credited with producing a number of new leaders, including Joko Widodo.

But supporters of the new bill say direct elections are costly, ineffective and lead to corruption.

Fadli Zon is vice chairman of Indonesia's Gerindra Party. He recently told a discussion in Jakarta why his party is supporting the proposal.

"There is a heavy campaign burden. I think at least the cost of the campaign in each pilkada or regional election, direct election is 30-35 billion (Indonesian rupiah or $2.9 million) and I think this is only expense of KPU usually, the election committee. We're not talking about the campaign expenses, the witness expenses, the success team, and so on."

Fadli Zon says the total cost of directly electing mayors and governors at the local level is about five billion dollars.

In Indonesia, candidates often pay bribes to win a seat. Some spend much of their life savings to be elected. The bill's supporters say ending direct local elections would reduce such corruption. They say it would also reduce the number of election fraud – or dishonesty -- cases heard by the Constitutional Court.

Critics agree that Indonesia's democracy is costly to operate. But they argue that reducing the ability of people to directly elect their local leaders would damage the country's political progress.

Observers say ending direct local elections only changes where the bribes go. Instead of making these unlawful payments to voters, they say, the money will go to parties if the bill passes.

"It doesn't change the nature of politics. It won't make politics cleaner. It will only shift the money politics somewhere else, to the oligarchs, and the victims are the Indonesian people."

Suharto ruled the country for more than 30 years until he resigned as president in 1998. Since then, Indonesia has moved forward on reforms and limited the powers of the central government. More and more Indonesians have taken part in elections, and political debates have become more substantive.

Within Southeast Asia, Indonesia is now being praised as a democratic success story. When the new president takes power next month, it will be the first time that power will be passed from one directly elected leader to another in Indonesia. That claim cannot be made by Cambodia, Malaysia or Singapore.

Titi Anggraini is director of the Association for Elections and Democracy. She says the debate over this bill is about Indonesian democracy and strengthening the involvement of civil society.

Indonesian lawmakers are expected to vote on the measure on September 25.