Update Required To play the media you will need to either update your browser to a recent version or update your Flash plugin.
By VOA
15 September, 2014


The tweets show pictures of baby cats, nice shoes and bloody battlefields. The so-called "Umm network" produces the tweets. They claim to be foreign female jihadists on Twitter.

Many Arabic people use "umm" before names. The word means "mother" or "mother of."

The Umm network and what some call the Islamic State use Twitter to urge both men and women to serve the jihad movement. They also use it to send Islamic State pictures, videos and messages.

One of the best known members of the Umm network is @UmmLayth. She is also known as Aqsa Mahmood. She identifies herself as a teenager from Scotland with Arabic ancestry. She says she left home for Syria. An unconfirmed report says she married a militant.

Ms. Mahmood no longer tweets. But officials think online communications urged her to go to Syria.

The Centre for the Study of Radicalization in London said only about 30 European women are jihadists. But some fear more may join. Officials express concern that Western jihadists could return from Syria and Iraq and carry out terrorist attacks in their home countries.

Erin Saltman of the Quilliam Foundation in London said about 200 western women have traveled to Syria. In contrast, she said about 3,000 men traveled there. 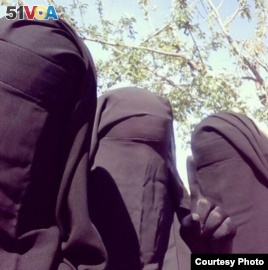 Someone calling themself @_UmmWaqqas posted this photo on Twitter of what they say are her friends @UmmLayth_, Umm Haritha and Umm Ubaydiah.

"With the influx of men, women are needed to serve as wives," Ms. Saltman said. "Social media accounts of jihadi wives serve to spread Islamic State propaganda, encourage other women to join and describe the life of a jihadist wife in order to reassure and give an idea of how life will be for potential recruits.

"Women are more likely to recruit fellow women to join IS, which is the primary goal of most of the female social media accounts."

Islamic State militants want to establish their version of a fully operating Islamic society, known as a caliphate. They believe they need women as wives and mothers to gain that goal.

Abu Bakr al-Baghdadi is the caliph, the leader, of the so-called Islamic State. He has urged both men and women to join in building the state.