In Kenya, Cities and Towns Are Growing Quickly

Update Required To play the media you will need to either update your browser to a recent version or update your Flash plugin.
By VOA
14 September, 2014


Kenya's towns and cities are growing quickly. Experts estimate at least 100,000 people move to the capital Nairobi every year from rural areas of the country. This has caused high demand for good housing. The Ministry of Housing estimates the city needs at least 200,000 new homes or apartments every year. That, they say, would meet the demand from new people and from those who are already in the city but live in poor conditions.

In 2009, the government estimated more than 3 million people lived in Nairobi. It says about two-thirds of them live in places where there is no running water, electricity or methods to remove waste.

Irene Njeri is 22 years old. She lives in one room with her son. She says it is difficult for them to be healthy.

"Like right now it's raining. We have a lot of, maybe, there (is) poor drainage and then because of the overcrowding, you find that a plot you have only maybe one bathroom and one latrine so you're using all of this. So it's, you find it's like more vulnerable to cholera or typhoid, malaria."

William Wachira blames poor housing on dishonest officials of the department of planning and housing. He says the bathroom in the house where he lives is in poor condition. He shares it with other people who live there. But he says when health inspectors visit the house, they do not force the owner to fix the problems. He says the inspectors demand an illegal payment, or bribe. If people living in the house do not pay it, he says, the inspectors force them to leave the home.

Tom Odongo is the chief of the city's urban planning, land and housing department. He admits there is a problem with the way the city inspects houses. But he said that will soon change. He says the city will soon be using its own workers to do the inspections. Now, the city pays private inspectors to do the work.

"(What) we have created in planning compliance and enforcement directorate is actually what response to this (poor housing inspection). It means that from the previous time we were using the private sector consultants to be our agents sometimes for carrying out inspections because of inadequate capacity internally. What now it means is that we will be able to have adequate capacity to, to carry out those inspections ourselves."

The demand for housing is so high that some homes are quickly -- and poorly -- built. And some developers are demanding high payments from people who need a place to live.

Mr. Odongo said the city is now treating its housing problems seriously and there is now a plan in place to deal with them. He says, in the next 15 years, the city will build enough government-owned houses to meet the demand. And he says the city will improve houses by punishing builders who do not build homes that meet the city's rules. 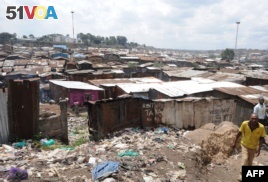 Mathare, one of the poorest slums -- places where poor people live -- in Nairobi, May 28, 2014.
"There has been a challenge on enforcement, especially, because of weak legislation which only fine people 100,000 shillings ($1,150) which is very easy for violators to pay. But what we are trying to do now is to change the course by involving people in the process of designing a new vision for development of the city. We are coming up with something that the citizens own. And with ownership then it will be easy for us to navigate the process of urban development because people do something that they have themselves designed."

An African housing conference is to be held in Kenya in October. Government officials, property owners and lenders will talk about the difficulties African nations face in providing good homes for their people.

estimate - v. to form an opinion about a value, size or amount using less than complete information

demand - v. to ask by ordering; to ask with force

electricity - n. energy that flows through wires to provide heat and light, and power to machines

condition - n. something declared necessary to complete an agreement; a person's or thing's health

pay/payment - v. to give money for work done or for something bought