Update Required To play the media you will need to either update your browser to a recent version or update your Flash plugin.
By Mario Ritter
30 August, 2017


A top United Nations official has criticized U.S. President Donald Trump for his repeated criticisms of the news media.

Trump has repeatedly criticized news organizations such as The New York Times newspaper and CNN television for their reporting. He has also been critical of The Washington Post newspaper, which is part of the internet business Amazon.

The president criticized some media organizations for their reports on violence in Charlottesville, Virginia earlier this month. The violence took place at a demonstration called by white nationalists. Their opponents launched a counter-protest to answer the demonstration. One counter-protester was killed in the violence. 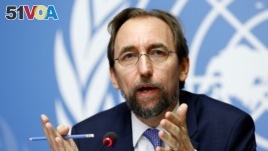 Later, Trump criticized the media for their reporting, calling some reporters "truly dishonest people" for the way they described those events.

Al-Hussein spoke about Trump's recent comments in Geneva Wednesday. "To call these news organizations fake does tremendous damage," the U.N. official said. He went on to question criticizing individual reporters. "Is this not an incitement for others to attack journalists" he asked?

Al-Hussein called the violence in Charlottesville an "abomination."

He added that a reporter from the Guardian newspaper had been, in his words, "assaulted in the United States most recently."

Al-Hussein also said he was worried about comments the president has made in the past about women, Mexicans and Muslims.

Al-Hussein formerly served as Jordan's ambassador to the United States. He has been the U.N.'s top human rights official since September 1, 2014.

Wayne Lee reported this story for VOANews. Mario Ritter adapted his report for Learning English. His story includes additional material from the Reuters news agency. George Grow was the editor.

tremendous – adj. to a very great or high level

abomination – n. something that causes horror or hatred