UN: One in Every 113 Persons Forcibly Displaced

Update Required To play the media you will need to either update your browser to a recent version or update your Flash plugin.
By Bruce Alpert
19 June, 2017


Last year, more people than ever were refugees or forcibly displaced from their home because of war, violence or persecution.

This information comes from the United Nations' refugee agency's "Global Trends Report." The UN agency said it found a record 65.6 million people were forcibly displaced at the end of 2016. That is about 300,000 more people than in 2015, and the most ever documented.

The agency said its report shows one of every 113 people worldwide is either a refugee or has been forcibly displaced within their own country. 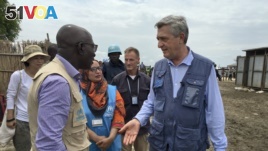 "By any measure, this is an unacceptable number, and it speaks louder than ever to the need for solidarity and common purpose in preventing and resolving crises," said Filippo Grandi of Italy.

Grandi is the UN high commissioner for refugees. He has worked on refugee issues for over 30 years.

The major reasons for the large number of displaced people are the civil war in Syria and the growing numbers of people fleeing South Sudan after the failure of peace efforts.

The UN agency found 40.3 million people were forcibly displaced and living somewhere inside their own country.

The number of refugees was 22.5 million. A refugee is defined as someone living outside their homeland because of war, violence or persecution – threats of punishment or bad treatment.

The UN report said the world's poorest nations are taking up the biggest responsibility of housing and providing food for displaced persons.

The UN report said 84 percent of all refugees are living in developing nations. Most of those fleeing from South Sudan have gone to neighboring Sudan, Uganda, Ethiopia, Kenya, Democratic Republic of Congo and the Central African Republic.

The UN Report called the large number of unaccompanied children asking for asylum a growing and difficult problem.

"Tragically, 75,000 asylum claims were received from children traveling alone or separated from their parent," the report noted.

Grandi said he is worried that the United Nations has received only about 23 percent of the $8 billion it requested to deal with the continuing Syrian civil war. He told VOA he hopes the shortfall is not because "the Syrians are forgotten" and that the money will soon be made available.

Grandi said the U.S. government gave $1.5 billion to the UN refugee agency last year -- more than any other nation. The Trump Administration has proposed cutting the government's $30 billion foreign-aid budget by nearly one third for 2018.

The Trump administration has defended the proposed cuts. In its budget proposal to Congress, administration officials said other countries must do their "fair share" as the U.S. works more on its own concerns and problems.

While people continued to flee in record numbers, the UN report noted that around 500,000 refugees returned home last year. Another 6.5 million people who had been forcibly displaced returned to their home communities.

But the report said many who returned "did so in less than ideal circumstances" and facing an uncertain future.

Lisa Schlein reported on this story for VOANews. Bruce Alpert adapted this story for Learning English, with additional reporting by The Associated Press and other sources. George Grow was the editor.

persecution - n. to treat (someone) cruelly or unfairly especially because of race or religious or political beliefs

solidarity - n. a feeling of unity between people who have the same interests, goals

resolve - v. to take care of a problem

unaccompanied - adj. children without parents or adults to oversee or supervise them