Update Required To play the media you will need to either update your browser to a recent version or update your Flash plugin.
By Mario Ritter
17 July, 2018

The tariffs would involve a combined $28.5 billion worth of U.S. exports. They were ordered in reaction to U.S. tariffs announced in March. However, U.S. Trade Representative Robert Lighthizer says the latest tariffs are illegal under WTO rules.

The Trump administration has said American national security interests justified tariffs it placed on imported aluminum and steel products. It said the tariffs are meant to protect the U.S. steel and aluminum industries from low-cost imports from other countries.

But the administration argues the tariffs put in place by the four countries and the EU are not permitted because they are not based on national security.

Under WTO rules, countries decide what their national security interests are. But the group also dissuades countries from overuse of that justification to avoid abuses.

Lighthizer said, "Instead of working with us to address a common problem, some of our trading partners have elected to respond with retaliatory tariffs designed to punish American workers, farmers and companies."

What is the WTO?

The World Trade Organization describes itself as the "only global international organization dealing with trade between nations." 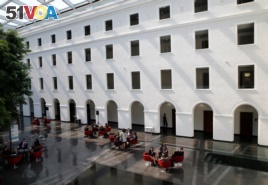 People are pictured in the headquarters of the World Trade Organization in Geneva, Switzerland, April 12, 2017.

There are trade agreements between countries or groups of countries that also set rules for international trade. These include the North American Free Trade Agreement, or NAFTA.

But WTO officials point out that these agreements are not designed to deal with big issues that affect many countries or individual industries across borders.

The WTO was established in 1995 following years of negotiations. The talks began at the end of World War Two and involved more than one hundred countries. The group has added more large economies in recent years including China in 2001, Vietnam in 2007 and Russia in 2012.

The body, which is based in Geneva, has a General Council that includes all its members. The Council carries out the business of negotiating, observing trade conditions and settling disputes among members in addition to other activities.

Below the General Council are many committees that specialize in the complex issues of trade in goods, services and intellectual property.

Decisions in the WTO are "generally made by consensus," meaning all members must agree. And, all members have an equal vote.

The latest disputes over U.S. tariffs have set off measures and counter-measures by the countries including China, the EU and Canada.

Mexico is one of the countries the U.S. has included in its WTO dispute action. Mexico's economy minister said the country would defend itself in the trade body against the latest U.S. actions.

The ministry said in a statement, "U.S. purchases of Mexican steel and aluminum do not represent a national security threat to that country."

The IMF continues to predict world economic growth will reach 3.9 percent in 2019. But it warned, "The risk of worse outcomes has increased."

Maurice Obstfeld is the chief economist for the IMF. He said the tariffs make the U.S. a target of trade actions if trade disputes continue to expand.

"The United States finds a relatively high share of its exports taxed in global markets in such a broader trade conflict," he said.

Megan Duzor reported this story for VOA News. Mario Ritter adapted it for VOA Learning English with additional material from the WTO. Caty Weaver was the editor.

address –v. to give attention to (something): to deal with (a matter, issue, problem, etc.)

justified –adj. to provide a good reason for something

retaliatory –adj. something bad done in reaction to some sort of injury or harm

intellectual property –n. something (such as an idea, invention, or process) that comes from a person's mind