Update Required To play the media you will need to either update your browser to a recent version or update your Flash plugin.
By Bryan Lynn
08 May, 2018


Students from across the United States are preparing to finish their high school education in the coming weeks.

Most of the students will graduate. Others will not.

Education experts say some of the graduates will be receiving a degree even though they did not complete all school requirements. Some school officials have been found to violate graduation policies in an effort to increase graduation rates.

In January, an independent audit discovered widespread graduation policy violations in the District of Columbia Public Schools, or DCPS. It found that about 34 percent of Washington D.C. public school students who graduated in 2017 had not met the district's graduation requirements.

The DCPS ordered the audit after several news organizations reported on the violations.

The audit said that students were permitted to pass classes at most D.C. high schools even if they had violated attendance policies. It also reported that sometimes students received passing grades even when they had missed the majority of classwork.

The audit said DCPS teachers and school leaders felt pressure from officials to pass and graduate as many students as possible. It noted the city had created a culture of breaking the rules to help struggling students get through the system.

The culture was fueled by the D.C. government's "aggressive graduation goals," the audit said. The findings forced officials to admit the system had major problems.

Washington D.C. Mayor Muriel Bowser said she believed many teachers and administrators had tried to do the right things to help students. But she added that "unfortunately, they did the wrong things." She promised that officials had taken the audit seriously and would take steps to correct the problems identified.

The DCPS recently issued a progress report ahead of this year's graduation ceremonies, set to take place in early June. The report estimated that just 46 percent of DCPS students were "on-track" to graduate in 2018.

The district defines on-track students as those "currently passing or having passed all courses required for graduation."

Mark Dynarski is an education expert at the Brookings Institution's Center on Children and Families in Washington D.C. He has studied graduation rates and requirements for years.

He says he thinks it will always be difficult to get a true picture of student progress while educators are held accountable for repeatedly reaching exact targets.

Dynarski says research has proven that people and groups can become corruptible when held accountable for reaching exact number goals. This sociological principle is known as Campbell's Law.

Dynarski says he thinks this idea helped create the problems in D.C. schools.

"In this case, they had kids who were absent for 60 days. And the high school knew they were absent, actually, which is kind of distressing. But they just said, well let's just let them graduate. Let's give them high school diplomas."

Dynarski and other experts have questioned whether any of the published graduation rates can be trusted.

"You know, how far does this go though, really? If we were to audit every single diploma awarded last year, how many of them would actually not meet the standards?" 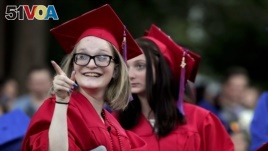 Another problem identified in the DCPS audit was the misuse of credit recovery programs at high schools across the district. These programs permit students to make up credit if they missed too many classes or failed a course. The students can make up the work during the school year. In many cases, this coursework can be completed online.

But the audit found D.C. Public Schools students violated credit recovery program requirements in several ways. Sometimes, the program was offered to students who had not failed a course and was instead used in place of usual coursework.

The audit also criticized administrators for creating their own credit recovery programs that did not meet district requirements.

Dynarski said there is growing evidence that these programs may not be the most effective method for teaching students about the subjects they are making up.

"So suppose you need a credit in science and you failed biology. So they send you off to some online service provider, and three weeks later, come back and say okay, I passed biology. Did you really learn anything in biology in three weeks?"

He says the major problem that results is some students graduate without the skills they need for college or employment.

Studies have also shown that such students have a much higher college dropout rate if they do go on to further study. This is because they have to work even harder to make up for lost time. Dynarski says graduating unprepared students just to reach a set target also harms the economy and society as a whole.

"My concern is really that the country, as a democratic society, is okay with this. That we're just okay kind of looking the other way. We recognize there might be a problem in the numbers, but we're just not going to worry about it."

unfortunately – adv. when something bad or unlucky happens

on-track – adj. acting in a way that is likely to achieve what is required

diploma – n. document showing a person has finished a course of study or has graduated from a school

society – n. large group of people who live in the same country or area and have the same laws, traditions, etc.