Update Required To play the media you will need to either update your browser to a recent version or update your Flash plugin.
By Gregory Stachel
28 October 2021


The United States has issued its first passport with an "X" sex, or gender, designation.

The State Department said Wednesday that it expects to be able to offer the choice more widely next year. It is a major step in the recognition of the rights of people who do not consider themselves male or female.

Jessica Stern is the Biden administration's special diplomatic representative for LGBTQ rights. She said it brings government documents in line with the "lived reality" that there are more sexes than just male or female. 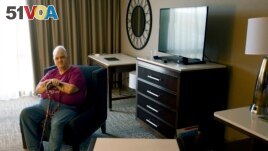 Dana Zzyym sits for a photo on October 27, 2021 in Fort Collins Colorado. Zzyym has been in a legal battle for years with the United States' government on if Zzyym can use a third gender marker on their passport. (AP Photo/Thomas Peipert)

The agency did not announce who received the passport. But Dana Zzyym claimed ownership in a telephone call with The Associated Press.

Zzyym, an intersex activist from Colorado, has battled the agency since 2015. Zzyym was denied a passport for failing to choose male or female on official documents. Court documents say Zzyym wrote "intersex" above the boxes marked "M" and "F." In a separate letter, Zzyym requested an "X" designation for intersex.

Zzyym was born without a definite gender. Court documents say Zzymm was raised as a boy and underwent several operations to appear fully male.

Zzyym served in the Navy as a male but later came to identify as intersex while working and studying at Colorado State University.

The State Department's denial of Zzyym's passport prevented Zzyym from being able to travel to a meeting of Organization Intersex International in Mexico.

The State Department announced in June that it was moving toward adding a third gender designation for nonbinary, intersex, and gender-nonconforming people. A nonbinary person is someone whose gender identity is not completely male or female. A gender-nonconforming person is someone who does not follow the expected behaviors of their birth gender.

The State Department said that adding a third gender designation would take time because it would require many changes to its computer system. An official said the passport document and system with the "X" designation still must be approved by the Office of Management and Budget.

The agency now also permits individuals to choose if they are male or female. It no longer requires them to provide medical documents if their gender is not the same as what is listed on other official documents.

The United States joins a small group of countries that permits citizens to choose a gender other than male or female on their passports. It includes Australia, New Zealand, Nepal, and Canada.

Stern said her office planned to talk about the United States' experience with the change in its dealings with other countries.

She hopes that it might push other governments to offer the X marker.

"We see this as a way of affirming and uplifting the human rights of trans and intersex and gender-nonconforming and nonbinary people everywhere," she said.

Colleen Slevin reported this story for The Associated Press. Gregory Stachel adapted it for VOA Learning English. Susan Shand was the editor.

intersex – adj. used for multiple conditions in which a person is born with reproductive or sexual biology that does not seem to fit usual definitions of male or female

affirm – v. to show a strong belief in or dedication to (something, such as an important idea)

trans – adj. used to describe someone who has a gender that is different from the one given to them at birth