Update Required To play the media you will need to either update your browser to a recent version or update your Flash plugin.
By Dan Friedell
22 February 2021


The United States reached 500,000 deaths linked to COVID-19, the disease caused by the new coronavirus, on Monday.

U.S. President Joe Biden spoke about the global health crisis late Monday. He led a moment of silence and a candle-lighting ceremony to remember those who died at the White House. First lady Jill Biden and Vice President Kamala Harris and her husband joined him.

Dr. Anthony Fauci is the top expert on infectious diseases in the U.S. He told CNN television news on Sunday: "It's nothing like we have ever been through in the last 102 years, since the 1918 influenza pandemic."

Johns Hopkins University in the U.S. state of Maryland records information about the crisis from around the world, including the number of deaths, on its website. It says nearly 2.5 million have died worldwide. 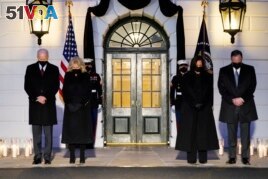 Experts believe the total number of deaths could be higher because of testing problems earlier in the health crisis. They believe people who died from COVID-19 may not have been counted.

Johns Hopkins estimates that there have been more than 110 million cases of COVID-19 worldwide. The U.S. number is more than 28 million, followed by India, which has about 11 million.

The United States is currently vaccinating millions of people. President Biden promised to vaccinate 100 million people in his first 100 days in office. It is likely the number will be higher than that. Currently, about 1.7 million people are being vaccinated each day.

Even with the vaccine, a mathematical model from the University of Washington predicts that there will be close to 600,000 deaths in the United States by June 1.

The Associated Press and VOA wrote this story. Dan Friedell adapted it for Learning English. Mario Ritter, Jr. was the editor.

What do you think about the sad milestone? We want to hear from you. Write to us in the Comments Section and visit 51VOA.COM.

moment of silence - n. a short period of silent thought as a way to remember a tragic event or time