Update Required To play the media you will need to either update your browser to a recent version or update your Flash plugin.
By Christopher Jones-Cruise
27 June, 2017


The United States Supreme Court has rejected another call to decide whether Americans have a legal right to carry guns outside their homes.

The high court released rulings on a number of cases Monday. But it refused to hear a case against a California law that sets limits on carrying guns in public.

The high court left in place an appeals court ruling in the case. 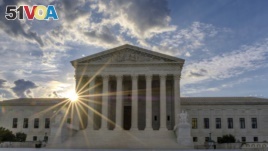 The appeals court confirmed the legality of a measure to limit permits for concealed weapons -- those placed out of sight.

The Supreme Court ruled in 2008 that the United States Constitution guarantees the right to carry a gun, at least for self-defense at home. But the court has refused repeated requests to expand on its understanding of gun rights.

More than 40 states already have rules giving gun owners a right to be armed in public.

A new study shows that Americans are as deeply divided about gun policy as they are about immigration, health care and other issues.

The Pew Research Center questioned 3,900 people nationwide. The resulting study found sharp differences of opinion between gun owners and those who do not own guns.

The study found that more than half of owners support creation of a federal database for recording gun sales. Eighty percent of those who do not own guns also support such an effort.

About half of gun owners support a ban on assault weapons, compared to almost 80 percent of non-gun owners.

Assault weapons have been compared to guns used in armed conflicts. Gun control activists say such weapons are meant to kill multiple people quickly, and not for civilian use.

Yet there was common ground among gun owners and non-gun owners on other issues.

Nearly 90 percent of all those questioned believe the government should bar the mentally sick from purchasing guns.

Also, about 80 percent of those who own guns believe people named on federal no-fly or watch lists should be prevented from buying guns.

Strong majorities of both groups support background investigations of those who buy guns from an individual or at gun shows.

The study also found that at least two-thirds of Americans have lived in a home with a gun. About half of those questioned who have never owned a gun said they had fired one.

Most of the gun owners described themselves as white males who are members of the Republican Party.

The study found that people who live in the Northeastern United States are less likely to own a gun than are people in other parts of the country.

Wayne Lee wrote this story for VOANews. Christopher Jones-Cruise adapted it for Learning English. George Grow was the editor.

assault weapon – n. a gun that can shoot many bullets quickly and that is designed for use by the military

multiple – adj. more than one; many