Update Required To play the media you will need to either update your browser to a recent version or update your Flash plugin.
By Faith Pirlo
06 January 2023


Hello! This week on Ask a Teacher, we will answer a question about the difference between three words: "veggie," "vegetarian," and "vegan." 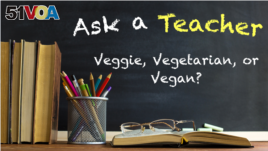 I am wondering if you could help me clarify the difference between "vegan," "vegetarian," and "veggie." When can we use them? Or are they interchangeable?

As we start the new year, many of us are thinking about ways to be healthier. This is a great question to begin our 2023 series of Ask a Teacher. Some of the answers might surprise you!

In American English, the noun "veggie" is a shortened and informal way to say "vegetable." It is used as a countable noun. To make the noun plural we add an "s."

My guinea pigs love to eat a many kinds of veggies, including lettuce, carrots and broccoli.

Veggie can also be used as an adjective meaning "vegetarian." American English speakers often use "veggie" as an adjective to describe vegetarian recipes and dishes rather than describing people as being "veggies."

We are grilling up some veggie burgers made with black beans.

As a noun, a "vegetarian" is a person who does not eat meat or fish. They usually eat foods made from plants. There are different kinds of vegetarians. Some eat eggs, others eat and drink dairy products like cheese and milk. Other people are flexible in their diet. For example, they might eat vegetarian food on some days of the week and eat animal products on other days. They are called "flexitarians."

Adaline became a vegetarian in college.

Mark is an ovo-vegetarian. He does not eat any animal products except for eggs.

"Vegetarian" can also be an adjective describing something that only has fruit or vegetables and no meat or fish.

I love Indian food not just for the bold and spicy flavors, but there are many vegetarian choices!

If a vegetarian does not eat fish or meat, what is a vegan?

A vegan, as a noun, is someone who does not eat or use any animal products or products made from animals. This can include things like honey from bees, whey protein from milk, and a color made from crushed insects called carmine often used in cosmetics.

She prefers agave nectar to honey because she is a vegan.

Veganism is more of a lifestyle and not just what people eat. Vegans are against killing animals. They do not use any animal products for health and environmental reasons. They are also against cruelty to animals.

Davey Havok, the singer of the band AFI, has been a vegan for 24 years.

Just like "vegetarian," "vegan" can be an adjective, too. It describes something that was not made from animal products and that did not involve harming an animal in any way.

Many bags are now made with vegan leather.

Please let us know if these explanations and examples have helped you, Noura!

guinea pig – n. a small furry animal, or rodent, that is often kept as a pet

tortilla chip – n. a thin, hard piece of food (called a chip) that is made from corn and usually salted

grill – v. to cook food on a metal frame over a fire

cosmetic – n. a substance that is put on the face or body to improve appearance

cruelty – n. actions that cause suffering