Update Required To play the media you will need to either update your browser to a recent version or update your Flash plugin.
By Gregory Stachel
03 June 2022


A resort in Vietnam has opened a glass-bottomed foot bridge connecting two mountains. It is the third such bridge in the Southeast Asian country.

The 150-meter-tall bridge crosses a deep, narrow area called a gorge. The aim of the bridge is to bring in thrill-seeking tourists.

The bridge is called the Bach Long suspension bridge. It means "White Dragon" in Vietnamese. A dragon is a huge, imaginary flying animal that can breathe out fire and looks like a reptile. 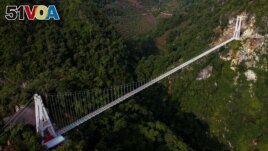 An view from above of the Bach Long glass bridge in the Son La area, Vietnam, on May 28, 2022. (REUTERS/Minh Nguyen)

The bridge is found in the Son La area. Son La is northwest of the capital, Hanoi, and borders Laos.

The opening ceremony included dragon dancing and a ribbon cutting. Vi Thi Thu is a 22-year-old visitor who attended the ceremony and walked on the bridge.

"I dared not look down as I am afraid of heights," she said. "I imagined in my head what would happen if I fell through...."

The bridge is 290 meters long and runs between two mountain tops on either side of a gorge. It also has a 342-meter pathway on the side of a mountain.

Guinness World Records keeps a list of world records. It lists a 562-meter glass-bottomed bridge in Qingyuan, in China's Guangdong area, as the world's longest.

The World Record Association is another organization that keeps a list of world records. It listed the two-part Vietnamese bridge as the world's longest, at 632 meters.

Tran Xuan Tinh is 72 years old and a visitor to the bridge. He seemed happy he walked on the bridge. He said he was frightened at first, but added, "If you walked over around 10 glass panels, that feeling is gone."

resort - n. a place where people go for vacations

thrill – n. a feeling of great excitement or happiness

dare – v. to do (something that is difficult or that people are usually afraid to do)