Update Required To play the media you will need to either update your browser to a recent version or update your Flash plugin.
By George Grow
07 October, 2014


Tuesday marks the 13th anniversary of the war in Afghanistan. The Afghan war is America's longest war. The United States military has been active in Afghanistan longer than in any other conflict on foreign soil

The bombing and invasion of Afghanistan were launched as part of America's "war on terrorism". U.S. officials linked al-Qaida to what happened on September 11th. The group was based in Afghanistan at the time. Its members lived there with the support of the Taliban, an Islamist group that ruled the country.

A lot has happened over the past 13 years. Afghanistan recently swore-in a new president. In addition, the two countries signed a security agreement. But the new government faces major economic problems and the threat of growing Taliban influence. 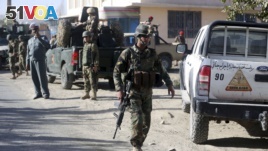 In the days after the agreement was signed, Taliban bombers attacked Afghan army buses in Kabul, the capital. Andrew Wilder is watching Afghanistan for the U.S. Institute of Peace, an independent group. He says the bombing shows how dangerous the country is.

Observers say the rise of Islamic State extremists in Syria and Iraq has gained the attention of many Afghans. They remember the 2003 US-led invasion of Iraq, and say it took attention away from the conflict in Afghanistan.

In recent months, Taliban fighters have made territorial gains. Their strength has raised questions about Afghan security forces and their ability to fight the rebel forces.

US Troop Levels in Afghanistan, 2001 to Present

General John Campbell is the commander of the International Security Assistance Forces, also known as ISAF. He says between 7,000 and 9,000 Afghan forces have been killed or wounded in fighting this year. That is more than the number last year at this time.

"The last couple of weeks, there has been an uptick, with the Taliban trying to make a statement as they close out the fighting season."

Afghan forces have been asked to take responsibility for more of the fighting, while ISAF plans to reduce its force to less than 13,000 in the country by the end of the year. Andrew Wilder says that means new duties for the international forces.

"It is important to emphasize that the main mission is not a combat mission...it is a training, advising and assisting mission."

A Pakistani soldier stands guard after driving out militants from North Waziristan along the Afghanistan border, July 9, 2014.

Much of Afghanistan's future will depend on relations with its neighbors, especially Pakistan. Janan Mosazai is the Afghan ambassador to Pakistan.

"The new government's focus in Afghanistan will certainly be on enhancing, enhancing and strengthening efforts to tackle, to defeat terrorists much more effectively."

Another problem facing the new government is the Afghan economy. Some observers say the economy is in serious trouble.

U.S. officials warn that corruption and the illegal drug trade are strong. Andrew Wilder says there is a reason for this.

"What is really going to de-legitimize this government, I think, even more so than a flawed election process will be if it can't pay salaries, can't provide social services and the economy collapses."

Afghan President Ashraf Ghani has called on the Taliban to join peace talks. But he said the invitation should not be seen as a sign of weakness.

This report was based on stories from VOA reporters Meredith Buel and Carla Babb. George Grow wrote it for Learning English. The editor was Jerilyn Watson.

anniversary – n. a yearly celebration or observance of an event that happened in the past

bomb – v. to set off an explosive device; to cause an explosion

country – n. a nation; the territory of a nation

extremist – n. a person with strong religious or political beliefs who acts in an extreme or violent way