What Should Come Next for Black Panther after Loss of Boseman

Update Required To play the media you will need to either update your browser to a recent version or update your Flash plugin.
By Alice Bryant
11 September 2020


Film company Marvel Studios has some difficult decisions to make as it plans the sequel to Black Panther.

The 2018 release was Hollywood's first major superhero film centered on Black characters. It was nominated for seven Academy Awards, including Best Picture. It won three Oscars.

In the film, Chadwick Boseman starred as T'Challa, who rules the imaginary African nation of Wakanda as the Black Panther with his superpowers. Critics praised the actor for his performance and he was expected to return to the part in the sequel.

But sadly, Boseman died of cancer on August 28. He was 43 years old.

Writers, professors and activists spoke to Reuters news agency about the cultural importance of the movie and Boseman's performance. Some said Marvel should honor Boseman by retiring the character of T'Challa and choosing another character to name as Black Panther. 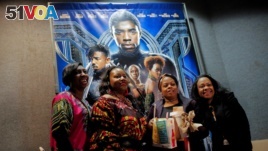 FILE PHOTO: A group of women pose for a photo in front of a poster advertising the film "Black Panther" on its opening night of screenings in Manhattan, New York, U.S., February 15, 2018. REUTERS/Andrew Kelly/File Photo

Jamil Smith writes for Rolling Stone magazine. He says the moviemakers should follow the story of the comic book series on which it is based. In the series, T'Challa is severely hurt by an enemy and the character Shuri, his sister, becomes Black Panther. The actor Letitia Wright played the character in the movie.

Smith told Reuters news agency, "We've seen her in action. We've seen her in the middle of these fights. Why would we not think she'd have the courage and strength to become the next Black Panther?"

Another possibility suggested is for the sequel to become a prequel --- telling the story of Black Panther as a young boy.

"Does (his character) come back as little Black Panther?" said Nicol Turner Lee. She is a public policy researcher at the Brookings Institution. "Does Disney honor the imagination of young boys and girls who looked up to him?"

Disney and Marvel chose not to comment when Reuters asked about their plans. On August 30, Disney honored Boseman by broadcasting the movie on television followed by a special program about the actor.

The 2018 movie was hugely popular. It cost $200 million to make and earned $1.35 billion from movie goers. Marvel had planned to begin production of Black Panther 2 in March 2021 and release it the following year. But the company said it suspended plans following Boseman's death.

The movie came after years of criticism about the lack of actors and filmmakers of color in Hollywood.

Black Panther also hit movie theaters at a time of growing racial tension in the U.S.

Alan Jenkins is a professor at Harvard Law School.

"One part of what made the film so important was the world of Wakanda and the idea of an African nation unchained by colonialism, slave trade, exploitation. It had dignity, brilliance and technology."

Today Black Panther may be even more meaningful, as Black Americans suffer more from COVID-19 and police abuses than whites, cultural experts say. The idea of Wakanda provides safety from that suffering.

"The film certainly didn't cause the activism of today - that was from the tragic killing of George Floyd and others," said Jenkins. But, he said it helped people "see new realities and imagine a world that is more just and equitable than the one in which we live."

comic book – n. a magazine that presents a story in the form of a comic strip, typically featuring the adventures of a superhero

character – n. a person who appears in a story, book, play, movie or television show

exploitation – n. the act of using someone in a way that helps you unfairly

dignity – n. a feeling or understanding that someone or something is important or serious and should be treated in an appropriate way