Who Doesn't Have a Tattoo? Body Ink Surges

Update Required To play the media you will need to either update your browser to a recent version or update your Flash plugin.
By Mary Gotschall
03 December, 2015


Soccer star David Beckham, voted "Sexiest Man Alive" by People magazine, has more than 40 of them.

Actress Reese Witherspoon has an image of a star with blue swallows.

Even the British Prime Minister's wife, Samantha Cameron, has one decorating her ankle.

Tattoos are no longer the sign of a sailor, soldier or criminal. They are wildly popular.

In America today, lots of people are getting tattoos — especially younger people. Forty percent of men and women aged 26 to 40 have at least one tattoo, according to Astanza, a laser technology company. 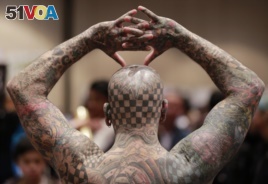 In Britain, tattoos are also surging in popularity. The Guardian reported that a fifth of all British adults have been "inked" – another term for being tattooed.

Celebrities have popularized tattoos. Actress Angelina Jolie had Thai tattoo master Sompong Kanphai ink a large image of a tiger on her back. David Beckham has several tattoos that are tributes to his wife and children. He told People that "Dream big, be unrealistic," written on his right knuckles, is one of his favorites.

It could be a search for identity.

"Tattoos, recent research suggests, don't just express identity, they help define it," writes Chris Weller in The Atlantic. In an era of rapid and unpredictable change, driven by technology, a tattoo can be a source of stability and permanence. This is particularly true for Millennials, who grew up with the Internet, notes Weller.

"Body art has taken on greater significance, and people want their ink to say something about who they are," he writes.

The cost of tattoos varies widely. It depends on the size of the tattoo and the complexity of the design. Professional artisans usually charge $100 to $300 per hour, notes the website Tattoo-Models.net. A large tattoo can cost thousands of dollars. Tattoos are also more expensive in big cities and cheaper in small towns.

Butch Johnson is owner of Champion Tattoo Company in Washington, D.C., located near the Capitol. He's been doing tattoos for over 20 years. His tattoos generally cost $80 to $200. He has a wide-ranging clientele and says many clients get multiple tattoos.

Tattoos are made by using a needle or other sharp instrument to inject various colors of ink into the skin. Modern tattoos have intricate patterns and use a wide range of colors.

Decorating the body with tattoos is an ancient art that dates back to the Stone Age.

Tattoos have been found in every part of the world. In many cultures, they are used for decoration, rites of passage or signs of status.

In Russia, for example, a 2,500-year-old mummy of a Siberian princess was found about two decades ago, sporting "remarkable tattoos," wrote The Siberian Times. Some depicted mythological animals, a snow leopard, and a deer. They were strikingly similar to designs of modern tattoos.

Natalia Polosmak is a Russian scientist who discovered the Siberian princess, a member of the Pazyryk people. "Tattoos were used as a means of personal identification," said Polosmak.

The Pazyryks believed "tattoos would be helpful in another life, making it easy for the same family and culture to find each other after death."

In the Mediterranean world of the 6th century, there were sacred tattoos to mark people as followers of "particular gods," writes Mairin Odle in The Appendix. Soldiers were tattooed with the number of their unit, to prevent desertion. And slaves were tattooed as punishment for misbehavior.

Native Americans used tattoos for a variety of purposes, writes Odle. British trader James Adair, living among the Chickasaw tribe in the 1740s, noted that war heroes were decorated with tattoos to show their bravery.

Temporary tattoos are an option for those who want to make a fashion statement, but don't want the permanence or the expense of the real thing. For example, Tattify sells a twin rose tattoo or a tiny elephant tattoo for just $2.99 each. You can also get a selection of strange animal tattoos for $9.99.

The tattoo removal business has grown along with the popularity of tattoos.

As many as half of all people who get tattoos later get them removed, reports the Washington Institute of Dermatologic Laser Surgery. Dermatologists use laser treatments to get rid of tattoos, which range from $350 for a small tattoo, up to $1,000 or more for a large one.

knuckles – n. any one of the thick, bony parts (called joints) in your fingers

needle – n. a very thin, pointed steel tube that is pushed through the skin so that something (such as a drug) can be put into your body or so that blood or other fluids can be taken from it

mummy – n. a dead body of a person or animal prepared for burial in the manner of the ancient Egyptians by treating it with oils and wrapping it in strips of cloth

princess – n. a female member of a royal family

mythological – adj. based on the myths of a particular group or culture

leopard – n. a large brownish-yellow cat with black spots that lives in Asia and Africa

desertion – n. the act of leaving the military without permission and without intending to return

bravery – n. the quality that allows someone to do things that are dangerous or frightening