Update Required To play the media you will need to either update your browser to a recent version or update your Flash plugin.
By VOA
07 December, 2018


The music from the film Black Panther -- and its artist Kendrick Lamar -- received more 2019 Grammy Award nominations than anyone else.

But the big news is the high number of women nominees, after being largely left out last year.

The Recording Academy announced the nominations Friday morning. It named Lamar eight times, including seven nominations for Black Panther: The Album, Music From and Inspired By. 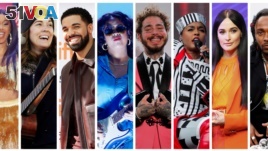 It is among eight album of the year nominations. A record five of the other nominations went to female artists. They are Cardi B, Kacey Musgraves, Janelle Monae, H.E.R. and Brandi Carlile. Artists Drake and Post Malone are also in the running.

The Panther nomination gives Lamar another chance to win an album of the year award. He has been nominated three times but has never won. His most recent loss was in February, when his critically praised DAMN fell short to Bruno Mars' 24K Magic.

Two months later, however, Lamar won a Pulitzer Prize for DAMN. He is the first popular music artist to win the honor.

Lamar's Top 10 hit, All the Stars, assisted by artist SZA, is nominated for both record and song of the year. Five other songs scored nominations in both categories, including Lady Gaga and Bradley Cooper's Shallow from the film A Star Is Born; Childish Gambino's This Is America; and Drake's God's Plan. The other two nominations went to Zedd, Maren Morris and Grey for The Middle and The Joke from Brandi Carlile.

Ella Mai's Boo'd Up and Shawn Mendes' In My Blood earned song of the year nominations, while Post Malone's Rockstar and Cardi B's I Like It, featuring Bad Bunny and J Balvin, complete the nominees for record of the year.

Just behind Lamar in number of nominations is Drake, who earned seven. Although he was nominated for album of the year, surprisingly, he did not win a place in the best rap album competition.

Recording Academy chief Neil Portnow was criticized earlier this year when he blamed women for their lack of representation at the Grammys. He said women need to "step up" if they wanted more nominations in the top categories.

Later, Portnow described his statement as a "poor choice of words." The academy launched an operation centered on inclusion and diversity. Portnow also announced he would be leaving the academy in 2019.

The Recording Academy will present the 2019 Grammy Awards in Los Angeles, California, on February 10. The ceremony will be broadcast live.

feature - v. to have or include (someone or something) as an important part

diversity - n. the quality or state of having many different forms, types, ideas, etc.